Orchestra of Exiles: Surviving the Holocaust Through Music

I had to descend into the furthest depths of my soul to find the hidden link between my impulse towards art and my impulse towards politics, and then I made a huge discovery. The true artist does not create art as an end in itself. He creates art for human beings. Humanity is the goal. 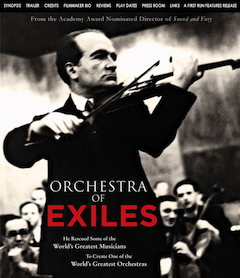 What director Steven Spielberg did for German businessman Oskar Schindler, documentary filmmaker Josh Aronson is poised to do for Polish violinist Bronislaw Huberman (1882–1947). With Aronson’s documentary, Orchestra of Exiles, airing nationwide on select PBS stations on April 14 and 15, large numbers of Americans will discover that Huberman, a child prodigy who wowed Brahms at a performance of his violin concerto in 1896, not only founded the Palestine Philharmonic Orchestra — now called the Israel Philharmonic — but also saved some one thousand Jews from Nazi extermination. That’s approximately the same number of Jews that Schindler saved.

“Everywhere I’ve been screening the film around the country, I have people standing up, often angry, because they don’t know Huberman’s story,” Aronson explains by phone. “When my friend Dorit Strauss told me the story 3½ years ago, I felt the same way. And that’s why I made the film.”

Strauss, an amateur pianist who studies with Aronson’s piano teacher and sometimes plays four-hand duos with Aronson, told him that Huberman saved the life of her father, David Gurdshlag, and took him to then-Palestine. “She came to a place in her life where she realized that everyone in her family was alive because of Huberman,” he says. “She realized that it’s tragic that no one today knows who Huberman was. When I discovered there were no books about him in English, and no films about him in any language, we dove in.”

“It’s tragic that no one today knows who Huberman was.” – Director Josh Aronson

As Aronson soon learned, even as Huberman toured Europe and the U.S. in the 1920s and early ’30s, sometimes performing private concerts for royal families, he carried within him memories of the horrific pogroms in Poland in the 1890s, as well as the human cost of World War I. When he became aware of the anti-Semitic storm that was advancing through Germany, and saw Hitler forcing Jewish musicians out of the great German orchestras, he took it upon himself to rescue some of the finest Jewish musicians in Germany and Poland by recruiting them for his new orchestra, the Palestine Philharmonic.

“I think he pictured that the swing of the pendulum was going to go much worse,” says Aronson. “He first began writing about it in 1935–1936, when he said, ‘This is becoming a mission of rescue.’ But still, he was just guessing.”

Huberman’s dedication to humanity lies at the heart of the documentary. After a slow opening segment, the story becomes riveting.

Huberman’s dedication to humanity lies at the heart of the documentary. After a slow opening segment, the story becomes riveting. We experience Huberman, with the help of the noted conductor William Steinberg, basically poaching people from the Jüdische Kulturbund, a cultural federation of Jewish artists, musicians, and actors that many naively thought would save German Jews from the Nazis. As we view re-creations of Huberman auditioning musicians, we feel his anguish at the knowledge of the then-unimaginable persecution that those who do not make the grade may experience. Interviews with Itzhak Perlman, Joshua Bell (who owns the Stradivarius violin that Huberman once possessed), Zubin Mehta, historian/conductor Leon Botstein, and others are interspersed with footage that shows conductor Arturo Toscanini, a staunch resistor of Nazi oppression, conducting the Palestine Philharmonic’s inaugural concert in Tel Aviv on Dec. 26, 1936.

While Orchestra of Exiles airs in New York City on Sunday, April 14, at 10 p.m. ET, the Bay Area’s KQED-TV has shamefully ghettoized it — as it does with much of its classical music programming; KQED airs it Monday, April 15, at 6:30 a.m. and 12:30 p.m. Those who cannot record it, nor catch it at Larkspur’s Lark Theater (where its run will probably be extended past April 4), can expect an overwhelmingly positive reception that will pave the way for multiple rebroadcasts and more commercial releases. Huberman’s mission is a deeply moving story that must be told.