Inhaling the Sweet Air at the Outsound Music Summit 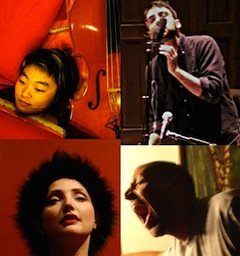 What at first seems extreme may turn out to be revelatory. That’s a little maxim that would fit the Outsound Music Summit, which celebrates its 10th anniversary beginning next week at the Community Music Center in San Francisco.

The festival highlights the amazingly diverse, active, and numerous members of the Bay Area experimental music community. Many of them train at Mills College, home of Fred Frith, one of the nation’s best improvisation teachers. Others migrate from around the nation. Either way, almost all the musicians in the Outsound Summit will be able to commute by BART train.

These experimental musicians are certainly not in it for the money, jokes Rent Romus, the festival’s founder and director. But that doesn’t mean that they’re audience-unfriendly or uncommunicative. Although this branch of the Bay Area’s incredible music scene is, as Romus puts it, “deeply underground,” the musicians engage in the same sorts of outreach that more mainstream festivals put on. Each concert of the week-long series is preceded by a preconcert Q&A with all the artists, and Monday’s event is the ever-popular Touch-the-Gear Expo, which is family friendly, and will certainly involve more unusual instruments than just violins and guitars.

The music is intentionally exploratory and the musicians are “doing their own thing” instead of forming string quartets or rock bands. This music scene has a wide variety of musical styles, most of which share some elements of improvisation and “extended technique” — that is, using instruments or the voice in nontraditional ways. But they can still be approachable. “I’m always looking for musicians who move me emotionally, even if they’re not as great technically,” says Romus. “The stated goal of the board — and it’s in our mission — is to support music that is expressive and emotionally satisfying.”

That idea is reflected in the very first program of the festival, titled “Face Music.” It features four vocalists working in quite different ways. But they all seem to rely on the incantatory power of the voice, and on our instinctive responses to it. Theresa Wong’s compositions can be meditative and gentle, as in Foretelling (see video). Joseph Rosenzweig problematizes communication and meaning in highly structured improvisations based on speech and text. Aurora Josephson uses her operatic training to explore a wide variety of emotional states, pushing out from pitched notes to notes attenuated by gargling (sometimes she holds water in her mouth to get this effect) to a full range of sounds, from simple breathing to animalistic noises. And she does it completely acoustically, without electronic processing. Jake Rodriguez, by contrast, takes you to the world of noise, manipulating his face and vocal cords while heavily processing the resulting sounds electronically. His music is scary and alien — noise is a difficult style to get into.

What’s easy to enjoy is the do-it-yourself spirit of the festival. Perhaps the best way to experience that is to show up on the final night for “Sonic Foundry Too,” in which musical inventors show off their newest instruments, including the Pan Lid Gamelan, the Percussion Ball, the Cigar Piano, and perhaps the most intriguing invention of all, the Sonic Suit. Presented by Bob Marsh (with Brenda Hutchinson), the sonic suit is worn on the body and makes music only when the performer moves. It is music and dance intimately woven together. How can you not want to see that?

It is true that you have to be a little bit adventurous to appreciate Outsound — there is fluidity to the scene, because it is not rooted in genres, which will test your openness to new experiences. But that’s even true of Outsound regulars. Romus has seen audience members leave for one act and come back for another, “... and I’m thinking, ‘Why would you applaud one weird musician and walk out on another weird musician?’” And Romus himself often has no idea what side an artist he has engaged will choose to show at that performance. “All I know,” he says, “is that the titles won’t change, because they’re printed in the program.”