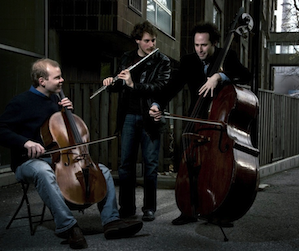 Greg Pattillo told us the other day, summing up all of his musical ambitions, “I want to be celebrated because people feel that the music they heard was awesome and because everyone just had a good time.”

It’s the meme for a new generation of musicians, in some ways it would seem, more determined than ever to practice their craft on their own terms.

Pattillo, 36, is a founding member of Project Trio, which is coming to the Harker School in San José on Friday, December 13. The Brooklyn-based chamber ensemble, which has drawn a huge audience across the Internet, includes Pattillo (flute), Eric Stephenson (cello), and Peter Seymour (double bass). The trio has been redefining the borders between classical music and jazz, and other styles, but their signature is in the way they’ve mastered the art of “beat boxing,” a form of vocal percussion with origins in hip-hop, the electric drum machine, and the long human history of rhythmic sound-making.

When the group was starting to break out in 2007 a New York Times article portrayed Pattillo as someone who “may be the best person in the world at what he does. He may also be the only person in the world who does what he does.” In those days Pattillo had a job at Trader Joe’s and after work he and Stephenson would sometimes go down into the subway, take up their instruments and put down a hat. Six years later they’ve become a rage and also a source of great inspiration to young musicians.

Along with performing they’ve developed an educational outreach program and given hundreds of concerts in schools, both private and public, around the country.

“We’re trying to make acoustic musical instruments relevant,” says Pattillo, “to make them cool. I think that’s one of the obstacles kids face these days, they often don’t know the instruments and they don’t how cool playing music really is — even if you don’t want to be a musician there’s something to appreciate in this.”

The outreach program is inspired by the Dalcroze method, a process of experiencing music through eurhythmics. The method was developed in the early 20th-century by Swiss composer and musician Emile Jaques-Dalcroze and employs a metronome, which as Pattillo puts it, never lies, and serves as the means by which one can practice “flawless rhythm.”

“We’re trying to make acoustic musical instruments relevant,” says Pattillo, “to make them cool ... even if you don’t want to be a musician there’s something to appreciate in this.”

“At first,” says Pattillo, “it all seems simple, but actually it’s very difficult. It offers musicians a way to help with improvisation, harmony, melody and beat box techniques, things like breathing, so you can stop on a dime, and just generally how to use body language and your emotions.”

We asked Pattillo, who has described himself as a “recovering classical musician,” about his efforts at entrepreneurship.

“It’s certainly been a struggle in my life as a musician,” he replied, “coming up through a conservatory (he got an M.A. at the Cleveland Institute of Music), where I was doing a lot of teaching but not much performing. All I wanted was an orchestral job but I was never able to get one, and then we started this ensemble, which has become a direct answer to this question of how to be a musician in changing times.

“In the beginning we were particularly frustrated because the music industry wasn't working our way. We wanted to play our kind of music, however we wanted. We also wanted to establish an excellent outreach program. But of course these are luxuries you don’t get playing in an orchestra. Now, after seven years, we’re delighted with the feeling of being at the vanguard of this movement toward entrepreneurship. We deliberately don’t have a record deal. We make our own records (Chrysalis), we sell, we promote, we do it all ourselves, and we rely on new media, which has enabled us to reach a lot of people in a way that even 10 years ago wasn’t possible.”

I believe that 10 years from now there will be a much better place for this non-classical, new 21st century musician ... Learning about music is so much more accessible now; you can learn to play an instrument just by watching YouTube videos.  I can tell you from our experience, it’s a lot of fun. - Pattillo

Pattillo, who once lived in San Francisco’s Mission District, adds that the trio is made up of “three guys with modest taste. We live in an expensive city and we don’t own mansions. We don’t attempt to live large. What we’re trying to do is to spread the message that while orchestras are failing left and right and unions are shrinking, you can still make it.”

“I believe that 10 years from now there will be a much better place for this non-classical, new 21st century musician. Of course, it’s all dependent on economics, and right now you have tons of poor musicians and a few extremely wealthy musicians, and most of those are in the pop category. And there’s nothing really in between. But I think over time it’s going to level out. After all, access to learning about music is so much more accessible now; you can learn to play an instrument just by watching YouTube videos. You almost don’t need a classroom or a teacher anymore. Now, how will this new class of musician function? I’m not sure. But I can tell you from our experience, it’s a lot of fun.

Pattillo’s dream is to make classical music more relevant, more cool, in part by developing a new ‘crossover’ repertoire, which is “modern and different, and hopefully palatable.”

“We’re well aware of the experience of going to hear ‘new music’ and having it not sit well, you know, where it just sounds like strange music. And, of course, I understand that you may have to listen to some kinds of music a few times to appreciate it. But I grew up listening to hip-hop and I like accessible music. Of the three of us in the trio I definitely have more pop tastes; that’s how I came to the flute with the beatbox. I like to play more than so-called ‘important music.’

It’s all about fun, he said, all about connection, and improvisation in every sense.

“We have a lot of fun making extremely silly videos and we have all sorts of unreleased whimsies and fantastical music. Probably most of it never see the light of day. We also want to make music for films and cartoons.”

The trio is working on a concerto that Pattillo hopes to unveil within two years.

Concert begins at 8 p.m. in the Nichols Hall auditorium, at The Harker School’s upper school campus at 500 Saratoga Ave. in San Jose. Complimentary soft drinks and hors d'oeuvres will be served at a 7 p.m. reception. Tickets can be purchased via the Harker Concert Series website: www.harker.org/concertseries. See the trio on YouTube: “Beatbox flute 101— a lesson with Greg Pattillo” and “Greg Pattillo Beat boxing flute Peter and the Wolf.”