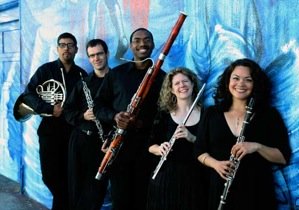 Immigration is one of those far-reaching, highly contentious, and socially polarizing issues you simply can’t escape. Everyone has an opinion on immigration and theirs, of course, is the right one. With its implications branching into such vast political arenas as economic sustainability and national security, it’s easy to see why immigration has become so desensitized. In an effort to create new discussion, many contemporary artists — musicians and visual performers alike — have taken the topic to their own mediums. Art, which has a history of both mimicking and influencing politics, is the one bastion in which immigration might actually find new voice.

To this end, a contemporary wind ensemble, Quinteto Latino, is set to discuss the plight of the unnamed immigrant in a new piece to premiere at MACLA March 16–18.

This work is the brainchild of the contemporary composer Guillermo Gallindo and QL founder Armando Castellano. An original concept and composition specifically written for Quinteto Latino, Voces del Desierto (Voices of the desert) blurs the conventional boundaries of theatricality, contemporary chamber orchestration, and musical performance.

“I was looking for Quinteto Latino to do something that I felt was going to make a statement, to get people to really look at the culture we’re presenting, in a new way,” Castellano said of his approach to Voces, “or to rethink issues that … are seen as being Latino-based typically.” He landed on the issue of immigration and, in searching for collaborators, he came across the work of Gallindo, who has an impressive catalog of multidisciplinary political performance art.

In April 2011, the two artists ventured to Laredo, Texas, and traveled along the U.S.–Mexico border for four days. Their experiences laid the groundwork for the two-movement, half-hour score and multimedia performance that would become Voces del Desierto.

In Laredo, the artists interviewed migrants attempting to cross the border, border patrol agents, and local residents. They also explored grounds alongside the Rio Grande River, collecting personal objects found strewn across its landscape and taking note of weather and terrain. Collected items were then shipped back to the Bay Area where they were repurposed as musical instruments.

“There were lots of clothes, shoes, plastic bags, water bottles, empty cans of juice;” Gallindo recounted, “even a child’s backpack with a flavored soda inside it. My goal was to find objects both that would tell me a story and that I could turn into musical instruments,” he said. “Everything was carefully chosen and classified. When I had enough of something, I respectfully left the rest of it behind.”

The resulting work blended the utility, craftsmanship, and style of a traditional musical instrument with the purpose, design, and aesthetic of a fine arts piece.

“Initially, the instruments were conceived as idiophones [instruments whose sound comes from their body]. When I found them, I immediately started scraping, hitting, shaking, and rubbing them in order to produce sound. Then I came up with other alternatives,” said Gallindo. “Each of the instruments has a particular character, an imaginary story, and a particular voice.”

“At the last rehearsal I had,” Castellano recalled, “I warmed up, I did my long tones, did my scales. I was all ready to go. I pulled out all the crooks on my French horn — all the tubes — I pulled out my mouthpiece, turned it around, and played it like that for three hours.”

Composing for both invented and reimagined instruments has been a long, collaborative process; and some rehearsals have lasted hours to enable the two artists to come to a consensus over the rhythmic pacing on one particular page. “The first few performances got through about 11 pages,” said Castellano. “This is the first piece I’ve performed which is that intimate. I think that’s why the piece is turning out so well.”

Multimedia is another aspect to the March 17 performance. Voces displays on multiple screens film of images collected in Laredo. The images have been manipulated in color and contrast to create a new visual environment that enhances the work’s unique musical landscape.

A third layer of audience participation rounds out the Voces experience. Beyond simply consuming the emotive aspects of the piece, the audience is encouraged to take part in a series of sensory exchanges — rituals that feed into the score’s primitive tone. Put together, the resulting work is an intricately woven sonic landscape of historic theatrical invention. The piece is at once meditative, disorienting, desperate, and nostalgic.

“I must say that I enjoyed every part of the process,” said Gallindo. “It was as important to figure out these things as the composition itself.”

Central to the Voces statement is its music. The piece draws on Meso-American, non-Western concepts of music — specifically, said Gallindo, music’s link to primitive spirituality and ritual. “I wanted to give a contemporary interpretation to the ideas and concepts of the music ritual and beliefs of the original inhabitants of this continent,” he said. “After being completely involved in computer music and technology, I am back to the basics of physical objects and the sounds they produce.”

In fact, the first movement of Voces was scored on a graphic design program, which allowed the music to move free from the constraints of measure, tempo, and meter. Grounding the work in such a fundamental way reasserts the shared, intrinsic, and connective nature of music — which the artists then project onto the issues of access, equality, and human rights connected with the immigration debate.

“I want the audience to experience some sort of transformative process; and I’m hoping that this will get people to think about what the [life] of people crossing the border is like and why they’re doing it,” said Castellano. “I just want people to see [migrants] as human beings in search of something better.”

This is the first time since its founding in 2003 that Quinteto Latino has endeavored to make a sociopolitical statement.

“Access, equality, quality of life … they’re serious topics that I feel are not part of the greater cultural discussion very often,” Castellano said, commenting on why he and Quinteto Latino decided to grow more political. “Here in California, [Latinos] are a big part of the culture, but we’re not often part of the discussion. That’s what I’m trying to bring out.”

“I think that the issue of immigration here in the United States is more relevant than ever,” said Gallindo. “A compassionate solution is needed immediately. To turn a blind eye and look the other way is absolutely unrealistic, and irresponsible. I am happy to know that artists are finally expressing themselves about this matter. I just hope that the audiences come to hear this work with open ears and that they take away something that transcends the music itself.”

Voces del Desierto is the most methodically planned and ambitiously produced work of both Castellano’s and Gallindo’s careers. Not only does the piece reflect the unique experiences of immigration, but, as with most art that courts politics, makes an appeal for tolerance. Rarely, though, does political art make this type of a statement in such a startling and refreshing way.

The future for Voces is promising. Quinteto Latino will serve a week’s residency at MACLA before heading to New York to perform the piece for the Pregones Theater.