We are in luck. When Britney Spears and Beethoven meet up in mid-July on Zellerbach Stage in the San Francisco Botanical Garden, it will not be a sci-fi accident or a freaky, time-warp musical spectacle.

Instead, rising loftily in pianist/composer Van-anh Nguyen’s imaginative blend, a three-minute pop song’s verse-chorus-verse-chorus structure and repeated four chords join and bring increased appreciation for the extended harmonic and key transformations typically relished over 45-minutes in classical concertos. Extrasensory stamps — sounds of nature, the smell and color of flowers, perhaps a cool glass of lemonade, the sight of enraptured children (and some still childlike adults) seated in the grass mere inches from a piano’s pedals — make it a signature event.

Another example? Three-note motives on parade in a Bobby McFerrin and Bach matchup. Composed with classically trained, Los Angeles-based Nguyen’s keen ear for hearing unexpected, common ground in unusual combinations, classical music finds itself parallel to contemporary rhythms. The result is a certain freshness, a freedom delivered, in part, by the music being heard outside of a concert hall, often with dinner purchased from a nearby food truck or brought from home in a picnic basket.

Among numerous inventive combinations served up in the cross-genre programs at Flower Piano — the annual 12-day celebration (July 11–22) presented by Sunset Piano co-founders Dean Mermell and Mauro ffortisimo in collaboration with the botanical garden — simple concepts are at the core. Combining the pleasures of listening to and making music and experiencing nature and gardens — the celebration is a grassroots extravaganza that attracts thousands of people. During concerts, workshops, classes, and other community programs, there is joy found not only in music, dance, yoga, and mindfulness practices, but in gardening, a scavenger hunt, special ticketed events — all shared in a dozen locations in the gardens’ 55 acres. Delightfully, players from beginning to professional can pull up a bench and tickle the ivories when the pianos are not reserved for a performance.

Los Angeles-based Nguyen says performing at the festival every year since its inception five years ago has been special. “The audience is extremely varied. That means I have an hour to play a variety of things for very different people. Talking to the audience is a big thing for me, so it’s not just an hour of sound. Last year, there were 5-year-olds who sat right by my feet and were fascinated.”

Nguyen was raised in an unusual household. Born in Vietnam and moving to Australia during her childhood, her mother was an opera singer and her father a classical guitarist. “It was rare, particularly the Western opera; especially when we came from Vietnam. But to be honest, Australia was not a huge classical music country either.” Nguyen believes she bypassed traditional barriers between genres because music undivided, she came to recognize at a young age, has broader appeal.

“My goal is to bridge the gaps and not categorize genre. I want to ensure younger musicians listen to classical music. By merging popular, familiar music, it’s a way of introducing them to classical music — and vice versa, because older people who mostly listen to classical music tell me they’re going to check out a Britney Spears song after one of my concerts. Taking out the pop lyrics is an interesting move too. It takes out the language barrier and makes it about sound, not words.” 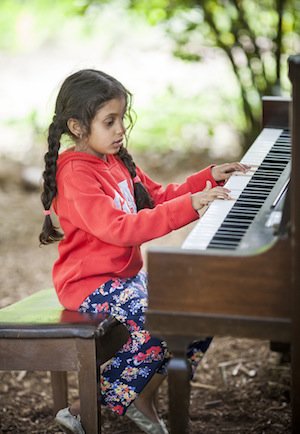 Nguyen says younger audiences in Vietnam and globally are interested in blended forms. Technology makes that easier. “Because of the internet, YouTube, things like that, people have the same access to all music as everyone else around the world. The fact that you have film scores that are now considered classical music is telling also. People who go to the Hollywood Bowl go out to hear classical music played live with film screenings. It’s mixed media that is drawing people to the music. That plays a huge role in where classical music is heading.”

It takes three pianos to satisfy Nguyen’s genre-defying musical appetite: a Yamaha is best for projecting pop material’s brightness in large venues; she adores the velvety, nuanced sound of an Fazioli for more intimate settings; and a Steinway is the “be all, end all” because the touch and timbre are perfect. “The $250,000 Steinway, if I could afford it, I could teach someone to play “Mary Had a Little Lamb” and it would sound terrific.”

But at Flower Piano, Nguyen and other performers judge the 12 pianos nestled within the garden by what they inspire, rather than by exacting, professional-level standards. “I believe in the concept so much,” she says. “Taking pianos into a garden for two weeks for the audience to enjoy but also to play themselves --- maybe to play the one thing you learned from childhood or [hear] played by established pianists; it’s an incredible two weeks. I come back every year and I will continue, as long as they’ll have me.”

For that, and for the festival’s many fine pleasures, we are most fortunate.