Music of All the Americas

Pride comes naturally when you’re a singer with the San Francisco Boys Chorus. Just ask eighth-grader Dominique Shaw about the delightfully eclectic program that he and fellow choristers will be presenting at Calvary Presbyterian Church in San Francisco on June 13. 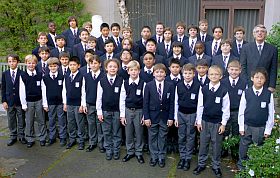 “Which chorus gets to go to the Inauguration and sing in the presence of the first African-American president?,” adds fifth-grader Julian Moreno, another boy soprano in the SFBC’s advanced Concert Chorus Group. “That was a big honor!”

Several of the patriotic pieces from that historic performance will be showcased at the upcoming concert. But “I didn’t want to do an entire concert of Americana,” notes SFBC Artistic Director and Conductor Ian Robertson. “I wanted to broaden it to the American hemisphere.”

Opening the evening is the magnificent Missa Criolla, a setting of the Catholic mass in Rioplatense Spanish, the dialect of the piece’s Argentinian composer, Ariel Ramírez. (The dialectal pronunciation of the second word of the title is ‘Cree-o-ja’.) In place of the usual classical ensemble, the Missa makes use of Latin American percussion, a string bass, and piano, as well as unfamiliar rhythms based on regional Argentinian dances. Robertson was impressed with how “The opening movement [Kyrie eleison] and the final movement [Agnus Dei] draw from that sense of spiritual stillness which the people on those flat open grasslands feel. And there’s this rambunctious stuff in the middle, which takes these rhythms and thrusts them up to their God.”

Following the transcendent drama of the Missa and an interlude by the SFBC Bellringers will be a Mexican folk lullaby, a favorite of choristers Shaw and Moreno. “It’s peaceful,” says Moreno, who sang it for his grandmother’s funeral. Then comes a kalenda, a precursor of the calypso from Trinidad, sung in pidgin French. A second Argentinian selection, based on a poem, is “altogether more astringent harmonically, very expressive,” says Robertson. San Sereni is a Puerto Rican children’s song with hand movements depicting characters, and for El Barquito, a Venezuelan folk song, “you get to do your own percussion with your hands and feet,” notes Shaw, “and you have to keep the [separate] rhythm of your voice. It’s tough!” A contemporary Venezuelan song is accompanied on the four-stringed cuatro by voice coach Jimmy Kansau, who also sings tenor in this and some other selections. The Chorus closes out the first half of the program with its three souvenirs from the Inauguration, including a setting by Bay Area composer David Conte of words from Obama’s nomination acceptance speech.

After intermission, the younger members of the SFBC's Apprentice, Junior Apprentice, and Intermediate Choruses offer music from Central and North America, as well as France and England. The older Concert and Intermediate Chorus boys will rock out with hits from Bill Haley and the Beach Boys, and all 250 choristers convene for the finale, Irving Berlin’s perennial God Bless America, “With the purity of the boys’ voices,” Robertson says, “there’s always that extra frisson, if you will, of ‘I didn’t expect it to sound like this.’”