“A classical inflection on popular culture.”

That’s how conductor Ben Simon put it, referring to the syncretism of the San Francisco Chamber Orchestra and Squid, Inc. Think of it as Mozart hooks up with Madonna. You can hear it this weekend in a series of concerts in San Francisco, Oakland, and San Mateo. This is the third in this year’s program of free family concerts offered by the S.F. Chamber Orchestra and designed to attract younger audiences and people who may not realize the possibilities of classical music. 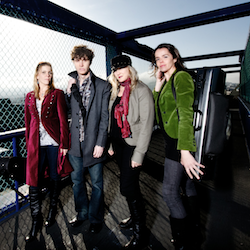 “My hope is that these kinds of concerts help to aerate classical music repertoires,” says Simon, best known as a conductor and once head of the Crowden School, but also a violist with the Naumburg Award-winning New World String Quartet, the Stanford String Quartet, and the Orpheus Chamber Orchestra. “This is all part of a new ethos among classical musicians.”

The Kronos Quartet was an early proponent of this style of programming, although these days the hot ensembles include the JACK Quartet, the now venerable Ethel Quartet, and Brooklyn Rider, which has been called “the future of chamber music.”

“We’ve had Squid three times in three years,” says Simon. “They are wildly popular. All are steeped in classical music and they are absolutely superb musicians. And they’ve come up with wonderful arrangements. I thought it would be interesting for young musicians to see how creative one can be and at the same time reach out to people who only listen to classical music.”

Squid emerged in 2010. Among their hopes was to create “an atmosphere of freedom of expression … being classical and rock and contemporary, the performed music is liberated from any preconceived notions.” The name is an acronym for “String Quartet In Denial.”

Members of the group — Hrabba Atladottir (violin), Jory Fankuchen (violin), Darcy Rindt (viola), and Beth Vandervennet (cello) — have played in coffee houses and symphony halls, with the likes of Death Cab for Cutie, Bjork, and Peter Gabriel, as well as the Musical Art Quintet, and the Transiberian Orchestra and the Magic*Magic Orchestra. Classical venues include, among others, the Metropolitan Opera Orchestra, the Berlin Philharmonic, the San Francisco Symphony and the New World Symphony.

As part of this family series Simon has invited local youth orchestras and ensembles — “young partners” — to perform 10-minute cameos during the middle of the formal concert. This weekend, the playbill includes a band from the Berkeley Jazz School, now the San Francisco Jazz Conservatory (March 30), along with ensembles from the San Domenico School, (March 29) and Magical Strings West, a Peninsula-based group of young musicians (March 30).

“These are some of the most talented young musicians in the area and if you’re are considering a career in classical music you should hear them.”