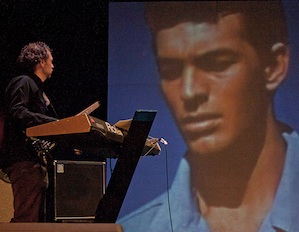 Given all we know about Harvey Milk, the proudly gay San Francisco Supervisor who was slain in City Hall by high-on-Twinkies ex-Supervisor Dan White, it is surprising to discover how much of his writings and speeches remain unknown. As composer/filmmaker Jack Curtis Dubowsky discovered when he set about gathering text for his cantata about Milk, which is slated for a June 22 premiere at the San Francisco Conservatory of Music, many of Milk’s finest speeches never made it into the book and the movie (Milk, 2008) about his life and legacy.

Dubowsky’s discovery came about after the conductor/artistic director of the Lesbian and Gay Chorus of San Francisco (LGCSF), William “Billy” Sauerland (formerly of Chanticleer), asked him to compose music for LGCSF’s performance at the GALA Choruses Convention of LGBT choruses in Denver this July. Sauerland wanted music that would be both unique and representative of the Bay Area community. As the two gay men put on their thinking caps, the idea that most excited Billy was a treatment of texts by Harvey Milk.

Dubowsky had worked with political texts before — in his Eisenhower Farewell Address and Quaker Peace Testimony — and was accustomed to setting writings that were never intended to be sung. Yet when he turned to Harvey Milk, he was in for a surprise.

“It turned out a lot of the really good Harvey Milk stuff is not in the public domain,” the Minnesota-based composer explains. “We had to work closely with Susan Goldstein, the archivist of the City of San Francisco, because the papers are in the collection of the city as well as the estate. What was really unusual is that Billy was granted permission to access the original papers, and the estate and city gave us permission to use the text. This was great, because Billy and I were able to mix material that was really well-known with unpublished writings.”

“It turned out a lot of the really good Harvey Milk stuff is not in the public domain.” – Jack Curtis Dubowsky

Six months later, this past April, Dubowsky completed his 20-minute long Harvey Milk Cantata. Structured in five movements, and designed for the capabilities of the LGCSF and the Lick-Wilmerding High School volunteer choruses, supported by Paul G. McCurdy’s piano accompaniment, it begins with “Recruit you,” a populist outreach that Milk typically used to open many of his speeches. On one level, Milk’s rallying call is a play on the homophobic notion that gays and lesbians are forever “recruiting” weak-kneed heterosexuals and the young.

The middle movement, the crux of the piece, is Harvey’s “Judgment speech.” “It’s an angry Dies Irae of sorts,” says Dubowsky, “and an argument against being in the closet.” (Shall I list how many internationally known conductors, musicians, and singers I’ve interviewed have failed to heed Milk’s words?)

After the fourth movement, “Hope,” comes a gentle postlude about inclusion. Milk, who was known for his rare ability to build bridges between communities, looks beyond the gay community as he discusses dialoguing with people of other orientations.

Milk was known for his rare ability to build bridges between communities.

Throughout the cantata, the composer spells out an abbreviated form of “Harvey” by using the notes B natural (H), A (A), F# (Fis, for “vey”), as in “Ha fee.” Dubowsky admits “it’s a bit of a dorky composer trick” that, with the help of the key-names in German, was also used by J.S. Bach (Bb A C B = BACH) and Dmitri Shostakovich (D Eb C B = “DSch”). Key progressions for the cantata’s five movements are also intentional, moving from B minor to A major, F# minor, B minor, and finally to C. That ultimate key, for Dubowsky, is highly symbolic of community, simplicity, and inclusion.

Reflecting on the cantata and on Milk’s legacy, which he’ll discuss at a 6:15 preconcert talk with Goldstein, Sauerland, and Tim Wilson, archivist of the Harvey Milk Collection/Hormel GLBT Center, Dubowsky says, “The speed at which things are moving is really interesting. I think, partly of the result of this rapid change, Harvey will be seen ultimately as a uniter and bridger of communities.” You can expect the LGCSF to sing that message home.