Hot Air Music Festival: Up, Up, and Away 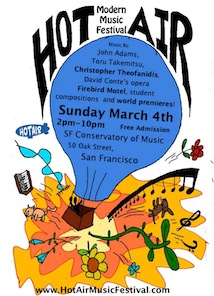 San Francisco Conservatory of Music hosts its third annual Hot Air Music Festival, an eight-hour, student-run showcase of some of the school’s most intriguing modern classical music. With less than a week until downbeat, and with a new organizer on the team, music is in the air and the bands are ready — all nine groups of them (including four bands and one debut band).

“It’s all in the Conservatory. There are three performance spaces in there. It moves between there and between the interchanged sets. I mean, basically, it’s modern music. There’s a huge variety there,” said composer and newcomer Red Bennett. “So, there’ll be all sorts of things. We’re trying to keep it very sort of casual. If you want to come in and just see an hour or two, or maybe just see a couple pieces and then go out and relax with your friends where you have the cafes, the Conservatory is open.”

Pieces to look for include David Lang’s Pulitzer Prize–winning Little Match Girl Passion and Heart of a Soldier composer Christopher Theofanidis’ opera Muse, as well as a full production of David Conte’s opera Firebird Motel, about which Bennett is particularly excited.

“One that I can tell you about is the opera that we’re doing, Firebird Motel. That’s one I’m very involved in. It’s very extensible. It’s very rooted in tradition but it’s also a really cool story, and we managed to get a great cast together and a great band,” said Bennett. “I think the story is really great, a love story. And there’s a crooked cop and all sorts of cool stuff — and ghosts!”

Bennett himself has no pieces at this year’s festival, though the lineup does include recent alumni and one of last year’s festival organizers, Matthew Cmiel, with his band After Everything, plus a few of Bennett’s favorites.

“There’s a couple things that I’m really looking forward to. One of those is called Rock Road Ripple, which is in the 2 o’clock hour. It’s really cool. There is a visual score that we’ll be projecting and you can sort of see the note patterns,” said Bennett. “The other piece that I’m looking forward to is called Lullaby for Pariah, by Anthony Porter. He’s an alumnus of the school and it’s something he actually never wrote a score for. He just recorded it for an album he wrote. It’s really great because it is just a piece of music that I really love. When I was asked to do the festival, it was one of the things I immediately thought of. It’s just a really beautiful piece of music. So, we took the recordings and we transcribed the score out of it.”

Admission to the Hot Air Music Festival is free. The first set starts at 2:00 p.m. Bennett believes that almost everyone will find some appealing music amid the seven sets to be played.

“I really think that there’s something here for all types of music lovers,” said Bennett. “I really hope that people will find something that they really like and that they also find something new that they might not have listened to otherwise but will fall in love with.”