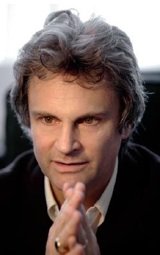 The upcoming San Francisco Opera production of Puccini’s La fanciulla del West, aka Girl of the Golden West, aka “Puccini's American opera,” returning here after an absence of 31 years, is the epitome of ”Italian-American.”

Puccini’s correspondence, says stage director Lorenzo Mariani, referred to the opera as “The Girl,” in English. But that’s the least of it, as the work is coming to the country’s most Italian-American opera company.

San Francisco Opera itself was created in 1923 by Gaetano Merola and an all-Italian board of directors and contributors. And now we have Mariani, artistic director of Palermo’s Teatro Massimo, born in New York City’s Little Italy (where his father ran the Asti Restaurant, famed for both food and opera, on 11th Street), and a Harvard graduate.

“The Girl” originated when the Belasco family, Sephardic Jews, had moved from England to San Francisco, where David Belasco (1853-1931) was born. His 1905 Girl of the Golden West provided the inspiration and text for the 1910 opera.

The idea for the new production, to be presented in the centennial year of Fanciulla, was born five years ago, when S.F. Opera General Director David Gockley visited Palermo, and invited Mariani and his frequent collaborator, the well-known scenic designer Maurizio Balò, to head up this new presentation.

Gockley was urged on — not that he needed encouragement — to stage a new Fanciulla by, yes, a prominent Italian-American, S.F. Opera Music Director Nicola Luisotti, who will conduct the work both here and at the Metropolitan Opera (where a different production is being presented).

The Opera is advertising Fanciulla as “the original spaghetti Western,” a somewhat crude promotion for a work that has its own crudities: gunfights, poker games, a (romantic) bandit pursued by a Wells Fargo agent, much drinking among the Gold Rush adventurers, and exclamations of “sacramento!” by which they do not mean California's capital. (The town is also mentioned in the opera because the hero hails from there. The state’s seat of government was Monterey, then San José, and only from 1879 on Sacramento.) 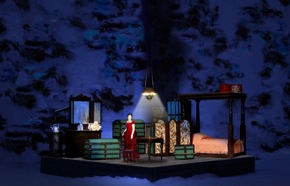 In Puccini’s preoccupation with “exotic” foreign lands — the China of Turandot, the Japan of Madama Butterfly, the Louisiana of Manon Lescaut — the violent verismo of his “American opera” is more reality-based than the others.

What Mariani calls “this link between America and Italy, the artistic dream of the new world, Puccini’s fascination with the frontier, longing for something far away” is also tinged with the sadness that never left the composer, following his brother’s death after he emigrated to Argentina. In the music, Mariani says, there is a strange similarity of “American sound” between choral numbers of Fanciulla and the Adagio of Dvořák’s New World Symphony.

Asked where he is positioned on the scale between traditional and Eurotrash opera directors, Mariani laughs. Italy, he explains, is different from the rest of Europe. “Elsewhere, people go to see opera; in Italy, they go to hear opera.” Music and singing are paramount. One of Mariani’s mentors was Jean-Pierre Ponnelle, who was responsible for many highly valued productions in the War Memorial during the Kurt Herbert Adler years. 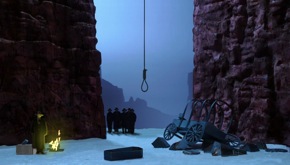 But don’t expect a plain vanilla Girl. Mariani speaks of “a dream sequence ... altered state ... the symbolism of gleaming gold ... lush romantic and surreal scenes intermingled ... the endless outdoors of the West.”

Gockley and Luisotti cast the new production generously. One of the Merola Program’s most famous alumnae, Deborah Voigt, sings the title role, while Salvatore Licitra is Dick Johnson (aka Ramerrez), and Roberto Frontali is Sheriff Jack Rance.