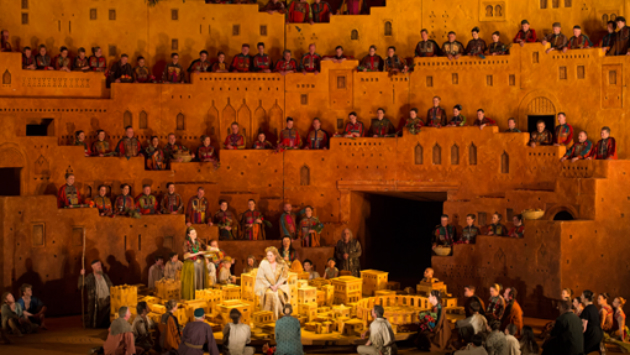 Numbers tell the story: Hector Berlioz's massive and majestic Les Troyens (“The Trojans”) was last performed in San Francisco 47 years ago — but even then in a drastically abbreviated version, running 3 1/2 hours (albeit with Régine Crespin and Guy Chauvet as Cassandra and Aeneas).

Then, a dozen years ago, an announcement was made of a San Francisco-Covent Garden-La Scala-Vienna Staatsoper co-production, but the $6-million cost of bringing the full, five-hour-long, two-part opera (The Fall of Troy and The Trojans at Carthage in one performance) here kept the production delayed.

Finally, San Francisco Opera General Director David Gockley — who was earlier forced to cancel a much-anticipated production of Britten's Peter Grimes for lack of funds — committed to Les Troyens this summer, with a sensational cast, conducted by Donald Runnicles.

The massive production by Sir David McVicar is the biggest and heaviest physical production ever to be presented on the War Memorial Opera House stage (which has had its share of Wagner Ring cycles and other biggies).

And now, a "Who is in Grant's tomb"-type question, perhaps with a more difficult answer: Who sings the title role of Les Troyens?

Why, it's the Trojans, portrayed by about 90 members of Ian Robertson's San Francisco Opera Chorus. With the June 7 opening still more than a month away, there they were, squeezed into a small rehearsal hall across the street from the War Memorial, singing through all of the more than two hours of music written for the chorus in the opera. Again. They've been at it since April.

Ever since I heard Janet Baker sing Les Troyens with Scottish Opera in 1969, I've thirsted to work on this piece but it has escaped me, till now.

It's an operatic pinnacle for any chorus and a career high point for me. It has more for chorus than any other opera: The chorus is one of the main characters and sings all night long.

I'm most excited that the music is unconventional, very original, very French, and very well written for chorus. There's nothing else like it!

The music (which has been running in my head since hearing a Met broadcast decades ago, followed by many recordings) seems evergreen even to choristers who have been through it over and over again. Sigmund Seigel — with the chorus since 1981 — tries to put the Berlioz magic in words: 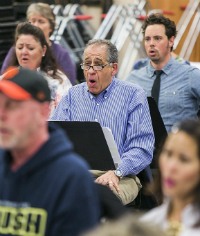 What's unusual is the change in harmonies, unexpected even after hearing and singing the music many times. Some of the rhythms seem almost syncopated; in a Verdi or Mozart opera, you know where it's going, but Berlioz all of a sudden has a key change, a sudden shift in tempo. It's both hard and most enjoyable.

Sally Mouzon, who joined the chorus in 1998, has the same impression: "the music fools you, it's one thing, but then it switches into something else."

Rehearsals are not only for learning the music and the words — with the help of French language coach Patricia Kristof Moy —  but also, as Mouzon puts it, "to learn the ensemble sound, the feeling of being together."

The music, she says, is "amazing, dramatic, the women have such gorgeous passages."

For Seigel, the San Francisco production is a dream come true, having been enchanted by the opera ever since he saw it at the Met in 1973 — in the standing room, but that mattered little at a performance with Rafael Kubelik making his conducting debut and Jon Vickers as Aeneas.

In San Francisco, the tenor role marks the return of 2001 Merola Program alumnus Bryan Hymel, who triumphed as Aeneas in London. (You can also find him on the cover of the June edition of Opera News.) Anna Caterina Antonacci and Michaela Martens alternate as Cassandra, Susan Graham (Merola 1987) is Dido, Sasha Cooke is Anna, Christian van Horn is Narbal, and René Barbera sings Iopas.

The chorus will have the good fortune of getting into the Opera House for all six performances, audiences may not fare as well: The June 7 premiere in the 3,146-seat house is completely sold out, and tickets for the other performances are disappearing by the day. Small wonder — if you miss this production, you may have to wait 50 years or more for the next one.