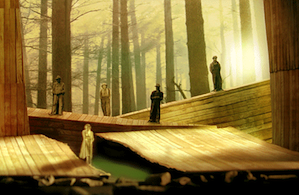 The Sept. 6 company premiere of Susannah at the San Francisco Opera serves as a long-awaited reunion of San Francisco Opera’s general director, David Gockley, and the opera’s composer and librettist, Carlisle Floyd. (It plays at the War Memorial till Sept. 21.)

“Any excuse to go to San Francisco is a good one, I think,” said the 88-year-old Floyd, speaking from his home in Tallahassee, Florida, where Susannah had debuted in 1955 at Floyd’s then place of employment, Florida State University. “The fact that this is David’s production, and something that he has planned for some time, makes it very highly anticipated by me,” the composer continued. The two men had become close collaborators since Gockley was appointed general director of the Houston Grand Opera, in 1972, and Floyd joined the faculty of the University of Houston six years later.

Yet Gockley’s acquaintance with the aesthetics of Floyd’s musicality preceded that teamwork. In his Opera House office recently, Gockley recalls that his former wife, soprano Patricia Wise, had purchased sheet music for the arias of Susannah’s title character, “Ain’t It a Pretty Night” and “The Trees on the Mountain.” “My tastes have always been populist, as opposed to trying to be chic and please some of the critics and very few of the audience,” he points out. So he found himself surprised and pleased that “someone was writing something this gorgeous, at a time when most modern opera shied away from what we know of as melodic material.… And as soon as I began programming for Houston, when we did the Spring Opera Festival in a park (here I am being my populist self), we did Elixir of Love, a new production of Susannah, and A Soldier’s Tale.”

Gockley had also been impressed with Floyd’s second-most popular opera, Of Mice and Men, based on the Steinbeck novel, and had included it in his first season of indoor programming in Houston. At the same time, he engaged Floyd in the creation of the Houston Opera Studio, for emerging artists, and commissioned from him yet another America-based opera, Bilby’s Doll, for the 1976 Bicentennial. Several other Floyd commissions followed, the latest of which was Cold Sassy Tree, in 2000, dedicated to Gockley, who notes, “I think we both agreed that new operas should be done, and should be user-friendly for the most part.”

“Someone was writing something this gorgeous, at a time when most modern opera shied away from what we know of as melodic material.” –David Gockley

Seventeen years Floyd’s junior, Gockley enjoyed a rare camaraderie with his favored composer, who “loved to get together late at night after a rehearsal and drink Black Jack bourbon, which is good for a Southern Boy. I was beer and wine, but I would join in.” Floyd retained the accent and gentility of his rearing in the southeastern U.S., “and was always very, very polite, but very insistent that his pieces were his. And we were there for each other, regularly. He kind of helped me through a divorce [from Wise], and I helped him through a deep depression. The most prominent thing I did was to commission the revision of his The Passion of Jonathan Wade. It got him working.”

After his move to San Francisco in 2006, Gockley was eager to program his old friend, “but it kept getting postponed, partly to do some new pieces, ’cause that’s my signature. It was always on the front burner, and for this season I said to myself, ‘No more postponing; we gotta do it.’ The public really doesn’t know Susannah here.” 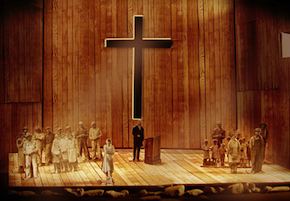 Elsewhere around the country, and occasionally overseas, Susannah has arguably been performed more times in more productions than any other American opera, and his first opera has proved a hard act to follow for its composer. Success early in one’s career “does create a bar that you have to keep working towards, and at the same time not repeat yourself,” says Floyd. He directed a Spring Opera production of Susannah in 1962, and despite his teaching responsibilities in Florida and Houston and his involvement in several opera and arts organizations, he’s been diligent about traveling to performances of his work. “I remember when I was present for the recording [of Susannah] back in ’93, in Lyons, France [under Kent Nagano],” says Floyd. “I said to myself, ‘I can see why this opera is still around.’ I felt it still emerged dramatically and musically. I think it’s a very workable libretto [by him], and I think the music is very accessible. I didn’t start out trying to be accessible, but it’s my own idiom; otherwise, you’re stiff-arming your audience.”

Floyd’s first opera is also, he allows, “closest to my origins” of all his longer works. He got the playful “Jaybird” song, shared by Susannah and her brother Sam, from his maternal grandfather, and the experience of religious revival from his minister father.

“I said to myself, ‘I can see why this opera is still around.’ I felt it still emerged dramatically and musically. I think it’s a very workable libretto [by him], and I think the music is very accessible.” –Carlisle Floyd

“There are demands in Susannah that I’ve never equaled since, and don’t really want to; they are too extreme,” the composer continues. “But sopranos seem to be happily challenged by that, so who am I to complain? … I’m familiar with Pat [Patricia Racette, cast here in the title role]. She has a beautiful quality of voice, and is technically very secure. And I’m looking forward to this partly because I can’t, in a sense, imagine her in the role: She did the female lead in my last opera, Cold Sassy Tree, so I still see her very much in that role.”

Gockley feels confident on Racette’s appearance in the role of the opera’s beleaguered but brave young Southern woman. “It’s always described as a Tosca voice, so you gotta make sure that the soprano can really deliver in the middle voice, and then be able to pull those top notes, and even pianissimo top notes, out of her back pocket when needed. A lot of times, too-light voices have been performing Susannah, but having Patricia Racette, who is a Tosca, and as of recently has been a Salome ...”

“I enjoy the juxtaposition of Carlisle’s speechlike settings, versus the broad, sweeping phrases in the arias, phrases that unleash the most powerful moments of raw emotion, or the quietist of introspection.” –Patricia Racette

The singer herself chimes in, via e-mail. “The dramatic thrust of this piece and this character is really what grabs me about the role,” declares Racette. “And musically speaking, I enjoy the juxtaposition of Carlisle’s speechlike settings, versus the broad, sweeping phrases in the arias, phrases that unleash the most powerful moments of raw emotion, or the quietist of introspection.” She notes that at age 19, she’d enrolled in a community college class solely for the purpose of taking on that role.

Now retired from teaching, and accompanied by his niece Jane since the passing of his longtime wife, Kay, Floyd has remained a mentor to younger opera composers, among them San Francisco–based Jake Heggie, who “said once that he would like to emulate what I’ve done, and I think that’s a very great compliment,” Floyd remarks. The elder composer is pleased with what he sees as a recently burgeoning acceptance of the forms of tonality and lyricism favored by him, Heggie, and others. “For about three or four decades we had a period of such doctrinaire writing and atonality, if you will — the Second Viennese School influence, which I think is rapidly diminishing now,” Floyd observes. “And I’m glad that I’ve lived long enough to see critics and audiences embrace idioms that don’t hew to any particular school. I think that’s very healthy and commendable.” Floyd will meet with San Francisco Conservatory of Music composition students during the first week of September, and will participate in a panel discussion on Susannah at the Conservatory on Aug. 28, with Gockley, Racette, stage director Michael Cavanagh, and conductor Karen Kamensek.

Just before our interview, Floyd received a clean bill of health from his physician, and he reports that the depression that sometimes has slowed his output is far behind him. A fastidiously researched and ringingly written biography of the composer by Thomas Holliday was published last year by Syracuse University Press. And its subject is finalizing yet another opera, Prince of Players, for yet another premiere in Houston, in time for a lengthy celebration of his 90th birthday.

“I think most artists have [them], to some degree,” Floyd says about his bygone blue periods. “It’s just holding ourselves to a very high standard, hoping that you’re reaching it, but, at the same time, wondering. I’ve gotten a great deal more confident in terms of the particular things I do well. At the same time, I think we all continue to need the approbation of our peers, and our audiences. Because we serve the public in this thing we do, especially in opera.”