Sure, Nicola Luisotti — aka Mr. Excitement — is making his debut on Friday, Sept. 11, as music director of the San Francisco Opera, leading Verdi's 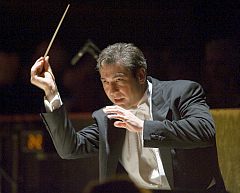 Il trovatore, yet the start of the opera season involves so much more. I’ve been around the block, but I don’t know of any other city where this annual event is such a powerful focal point of manifold activity.

From the very apex of Society, thronging to the Opera Ball to the ranks of us, the proletariat, taking in the free Opera in the Park on Sept. 13, a cross section of San Francisco will be involved with opera’s big weekend. The decades-old free opera concert in Golden Gate Park draws an audience of about 20,000.

The dressy parade of the Opera Ball comes in three layers:

Between the Opera’s 87th season-opening night Trovatore on Friday and the Sunday Opera in the Park, there is the Saturday, Sept. 12, donors-only dress rehearsal of Puccini's Il trittico. 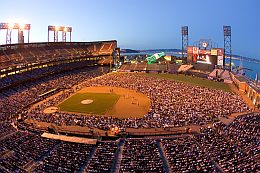 As if that weren’t enough, another major event in connection with the opening of the season is the Sept. 19 Webcor Builders free live simulcast of Trovatore in the AT&T Ballpark. This will be General Director David Gockley’s fourth such offering: The initial 2007 Samson and Delilah drew some 15,000 fans, the 2008 Lucia di Lammermoor 23,000, and the June 2009 Tosca netted 27,000.

Unless the city is finally getting some significant moisture from the sky on the appointed date, the Opera’s first Verdi in the Giants’ outdoor home — complete with garlic fries — may well swell to 30,000. That would mean the equivalent of 10 sold-out performances in the War Memorial Opera House.

There is also a plethora of Opera Guild events, preview lectures, and BRAVO! Club and other operatic activities. 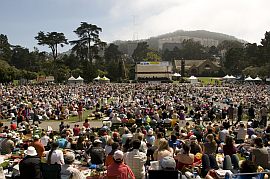 As to the main event in all this, it’s well and good that Luisotti’s calling card will be Il trovatore, the most Italian composer’s most Italian opera — a nonstop series of rhythmic, melodic, pulsating arias, duets, and ensemble numbers. (If you think there are too many mentions herein of La Bella Italia, consider that it was an all-Italian board that gave birth to the San Francisco Opera in 1923.)

If you want to Twitter about Trovatore, you could go along with the Opera’s own “suspenseful story of a corrupt count, a dashing warrior and a Gypsy who plots to avenge her mother’s wrongful death” — well below the 140-character limit, and doing a fair job.

The production in the War Memorial features Marco Berti in the title role, with Sondra Radvanovsky as Leonora, Stephanie Blythe as Azucena, Dmitri Hvorostovsky as Count di Luna, and Burak Bilgili as Ferrando.

David McVicar is director, while Charles Edwards designed the sets for the production, coming from the Chicago Lyric and New York’s Metropolitan Opera. The setting is updated from Spain in 1409 to the early 19th century, and it draws inspiration from Goya’s series of etchings called The Disasters of War.