Formenti's Aspects of the Divine

Marino Formenti may be an amazing virtuoso pianist, an "eccentric titan of the keyboard," and "a Glenn Gould for the 21st century," but he doesn't particularly care to be called a pianist. He considers himself a musician, who mainly plays the piano.

(He has performed on multiple pianos, and used ordinary objects in his performances, and he is also an opera conductor — but that's another story.) 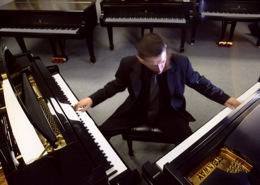 Formenti is also a major champion of contemporary music, and has performed Olivier Messiaen, Wolfgang Rihm, Luigi Nono, and many others, including as-yet-unknown composers. He made his San Francisco debut two years ago with an unusual concert at the new de Young Museum — a long program of short pieces by composers from Bach to Kurtág that were joined together without pause. He earned accolades for his "virtuoso brilliance, seductive intensity, and fluid chameleon shifts in the music."

Formenti now returns to the Bay Area, once again with San Francisco Performances, to offer two unusual concerts titled "Aspects of the Divine." On Dec. 5, he will perform Messiaen's monumental Vingt Regards sur l’Enfant-Jésus; on Dec. 11, Haydn's Seven Last Words of Our Saviour on the Cross and Berhard Lang's Monadologie V — Seven Last Words of Hasan.

Lang's work from the “Monadology” series is, according to Formenti, an “anti-piece” to Haydn's famous work. The new series of Monadologies concerns itself primarily with cellular processes, derived in poetic terms from the philosophy of Gottfried Wilhelm Leibnitz and Gilles Deleuze. The Hasan in the title is Hasan-i Sabbah, Sheikh of Alamut, who became head of the Shiite Arab Hashshashins (assassins) in 1090. His campaign was aimed at destroying the Abbasid Caliphate by murdering its most powerful members.

Of the upcoming concerts, Formenti says, "The older I get, the more convinced I am of music's spiritual aspects." He views the Messiaen as not only a gigantic piano work, but also something linked to "Indian tradition, Asian music, Japanese Noh theater, kabuki ritual ... with deep Catholicism and pantheism coalescing. Theater and ritual: a hidden opera, requiring intense concentration [from both artist and audience], a thrilling journey of about two hours without breaks." 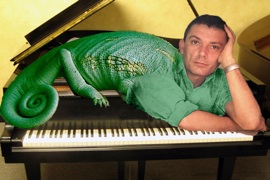 Isn't it possible to insert pauses or an intermission? "There is no intermission in the universe," he replies. "I try to push the idea of the piano a little further, emphasizing the importance of music, the idea of spiritual meditation."

Asked about the other concert, and why the Lang piece, which is commenting on Haydn, is programmed first, Formenti has a startling reply: "Haydn learned a whole lot from us."

Why do I put the Haydn last and the Lang first? Very trivially: If you invite two honorable speakers to talk, would you let the older or the younger one speak first? But more seriously: We really cannot see the time, music history as an horizontal line, as just a unidirectional sequel.

The past influences the future as much as the future does the past, in music maybe even more than everywhere else, if possible. Furtwaengler and Schnabel helped to create the "Beethoven-image" we have, which is in the end, Beethoven for us.

I think we indeed could say that Haydn takes a lot from us, from our interpretatlons of artists and of listeners, maybe just as much as we learn from him. I don't say this to sound disrespectful, on the very contrary, it's just to remind that there is no Joseph Haydn, there is only our Haydn! Haydn is dead! And Haydn is very much alive.

With amazing coincidence, just as I was mulling that over, a Telegraph science report tried to explain the quantum world weirdness of events in the future affecting what happened in the past. The "double slit experiment" says observing a particle now can change what happened to another in the past. It's a good thing there is no need to explain Formenti — you can just listen to him.