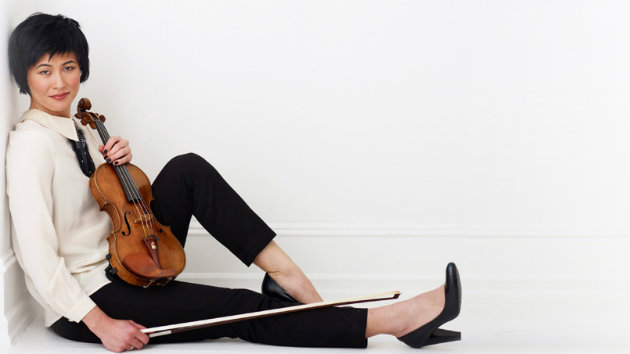 If you are among those who missed violinist Jennifer Koh in her previous appearances in the Bay Area, don’t make the same mistake twice.

Seated like granite in a chair, Koh played like a tornado as an aging Einstein in Cal Performances’ 2012 presentation of Einstein on the Beach, a revival of the epic, five-hour, 1976 stage piece by Robert Wilson, Philip Glass, and Lucinda Childs. In March of this year, the third installment of her multi-year project “Bach and Beyond” came to Berkeley’s Hertz Hall, where her virtuosity was occasionally a sidecar to a tender, technically brilliant display of artistry and interpretation. Echoes of earlier visits courtesy of San Francisco Performances since 2003 — a 2011 concert with Finnish composer Magnus Lindberg is embedded like a jewel in memory — remain unforgettable.

So it’s bound to be a distinct pleasure to launch into what will ultimately be four performances spanning San Francisco Performances’ 2015-16 season. The performances, a four-part project titled “Bridge to Beethoven,” pair Beethoven’s 10 sonatas for violin and piano with new works from four contemporary composers. Koh will be joined by longtime collaborator, pianist Shai Wosner. The first performance is Nov. 4, followed by an entirely different second concert Nov. 7, both at Herbst Theatre. The third and fourth installments of the project follow March 30 and April 2.

Recently named Musical America’s 2015 Instrumentalist of the Year, Koh emphasizes in interviews that she is the daughter of non-musicians. Born and raised in Glen Ellyn, Ill., her parents came to the United States from their homeland in Korea, seeking education and opportunity. Her father worked in the cleaning industry, her mother taught at Dominican University. Koh began playing violin at age 3 and debuted with the Chicago Symphony Orchestra at age 11.

She studied English literature at Oberlin College before attending the Curtis Institute of Music, where Jaime Laredo was an influential instructor and mentor. In addition to guest appearances with orchestras worldwide, Koh is recognized for her violin repertoire-expanding commissions and projects, a behind-the-scenes “Off Stage On Record” YouTube series, and MusicBridge, the non-profit she founded to promote collaborative and educational initiatives that include Bridge to Beethoven.

“This project was unusual for me,” Koh says in a phone interview from her home in New York. “I normally come up with a concept and then the repertoire falls in place.” Instead, the 10 Beethoven sonatas, four modern-day composers, and a deep, professional, symbiotic relationship with partner Wosner presented themselves as entities whose time for combined exploration had come. If anything tempts Koh, it is a project that furthers her and audiences’ understanding of the classical and contemporary music canons.

“Bridge to Beethoven” is comprised of  (Part I) Vijay Iyer’s Bridgetower Fantasy paired with sonatas Op. 12, No. 1  and Op. 47, “Kreutzer”; (Part II) Jörg Widmann’s Sommersonate with sonatas Op. 12, No. 2, Op. 23, and Op. 24, “Spring”; (Part III) Andrew Norman’s two short works woven throughout Beethoven’s Opus 30 Sonatas (nos. 6, 7, and 8); and (Part IV) a new commission by Anthony Cheung with sonatas Op. 12, No. 3 and Op. 96. Among the four commissioned composers, Koh notes that Indian composer Iyer is best known as a jazz pianist composer; Cheung is a pianist-composer of Chinese descent; Norman, from central California, was raised by non-musician parents; and German composer Widmann is the only composer with musician parents.

“There was a point of discovery in coming from diverse forces. For Iyer, it’s about uncovering hidden voices. Anthony (Cheung) is Chinese American, but writes in an avant garde style. We realized Beethoven is for all of us.”

In many ways, Koh’s realizations about the project arrived over years, if not decades. As a student, she set a goal to one day play all 10 sonatas. Rehearsing and performing with Wosner multiple times over many years, she says they have learned each other’s tendencies in performance. More than that, Koh has discovered a fellow perfectionist. “I like working. It’s nice to find a partner who wants to work as hard; someone with a specific vision who’ll not stop until it is realized. I feel kindred,” she says.

The projects arise from personal questions. Embarking on what she thought would be an investigation of her Korean-American experience and her relationship to Buddhist court and Shamanic music, she traveled to Korea, Cambodia, and Vietnam. “I thought I’d be inspired to create a project that was all about the Asian experience. What was funny — and taught me where I fit in — happened while I listened to Shaman music. I imagined connections to Western music, and realized I was a completely Western artist.”

The concept freed Koh to let down the floodgates of preconceived notions, including how she might play Beethoven’s work. “It’s been a strangely liberating project. These are huge, pinnacle compositions for violin and piano,” she says, suggesting that because of their importance in music literature, artists study the sonatas intently and have strong ideas about how they are to be played. “I know my interpretations have changed significantly,” Koh says.

Audiences will find that each composer has approached the sonatas differently. For example, Iyer has drawn on Beethoven’s original dedication of the “Kreutzer” Sonata to violinist George Bridgetower, with whom the composer later had a falling out and rededicated it to violinist Rodolphe Kreutzer. Using vernacular of the time, Beethoven’s dedication referred to Afro-European Bridgetower as “mulatto.” Koh says Iyer’s Bridgetower Fantasy incorporates African rhythms and other elements. “When I told him about the inspiration behind the project, he just ran with it. I was thrilled. He took a risk: He takes them all the time.”

Koh says that in the same way that the Beethoven project “has strong skeletal structures” and “good bones” upon which to stretch the expressiveness, coloration, and other attributes of her instrument and playing, classical music’s evolution introduces audiences to unique experiences. “Music and all forms of art (invite) emotion we don’t have every day. It’s a safe place that can open you unexpectedly. Even with Amazon, there’s no serendipity. You buy a book and they’re recommending a book just like it. The last place for serendipity is in the arts.”

Looking ahead, a 2018 project “on the horizon” will explore the Leonard Bernstein centennial and the multiplicity of the American voice. A second idea, too fresh to share, will take years to develop. “This is the best part,” Koh says, “because it could be anything.”