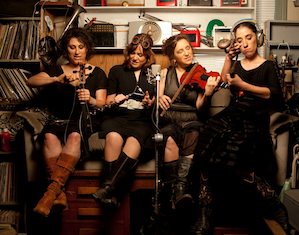 The game has changed more than many are ready to admit, and being a classical musician these days requires some real versatility. But with two CDs under its belt, including its recently released Four Sisters album, plus a month-long tour on deck, the Real Vocal String Quartet (or RVSQ) must be doing something right.

“We’ve all had classical training, and that’s a rigorous commitment we’ve all made in our lives because we love our particular relationship with string instruments, and of course we loved classical music and we still love classical music,” said RVSQ member Irene Sazer. “But we, for I think our whole lives, have also had the other foot in popular music, folk music, world music. We were all interested. It’s almost like the world is a playground for us, but the world’s also a very serious place.”

The quartet’s music, an eclectic mix of Brazilian, bluegrass, Jewish, Balkan, and Malian influenced arrangements, stands alone for another reason. The members sing — all of them — which is atypical for string quartets.

“And this is really just a manifestation of who we are,” Sazer remarked. “I’ve sung all my life, and I used to have a band called the Irene Sazer Band; I was a lead singer and I was in the band. Dina [Maccabee] has a number of groups she sings in. She has the Dina Maccabee Band and she also has a group called Ramon and Jessica, which is extremely vocal based. Jessica [Ivry] has been singing all her life, as well. Alisa [Rose] is newer to the concept of singing but is really into it. And so we do a lot of vocal rehearsing as well as string rehearsing in our work. I feel really grateful because these two different sides of me get to be integrated. I get to do it all in this group!”

Right now there are probably a few popcorn comments out there: What?! A quartet that sings? How can that be? What else can they do?

Making It Up as They Go Along

If that blew your mind, this might ruffle a few feathers: What really sets this group apart is their ability to improvise. Need convincing? The proof is in the pudding. Or in a phone call from Canadian singer Feist.

“[We thought,] ‘OMG. This is Fiest! This is really exciting.’ ... We were really hoping that they would see the level of creativity that we bring to the table, and they secretly were kind of hoping that we wouldn’t just be the run-of-the-mill classical quartet,” said Sazer, who openly respects other quartets. “They got so excited about the fact that we could improvise, but they got even more excited that we could improvise as an ensemble, which is one of our specialties. We do, on almost every concert we do, a piece that we just call Now, and we do free improvisation on the spot, and we listen to each other, and we play off each other. They freaked out over that. We did a lot of that on her record and they’d give us instructions, but then we could kind of run with the idea and use some of our improvisational skills. And then they asked us to sing backup on one tune and they loved that. Then we sang more backup on [the album Metals]! So it was wonderful. ... Then we did the Coachella Music Festival, which is the huge two-weekend rock festival, and we played with her. And we played on the Tonight Show With Jay Leno on one song. Totally exciting!”

No longer is improv reserved for jazz royalty, then, or for the bluesy elite, nor is it relegated to the corner of music “we don’t do.” It’s a part of surviving when there’s no guaranteeing a spot in the orchestra. RVSQ’s four musicians — Alisa Rose, on violin; Dina Maccabee, violin and viola; Jessica Ivry, cello; and Sazer, violin — all of whom also teach, are a product of the squeeze that many working musicians feel, yet they’re a part of something bigger, too: something that couldn’t exist five, 10, or 20 years ago.

No longer is improv reserved for jazz royalty or for the bluesy elite.

“A lot of young string players are starting to feel it, I think a little more, as the norm that you have options,” said Sazer. “It’s true that not everyone can be in an orchestra, and it’s tough economic times for orchestras. In the last 20 years, how many orchestras have gone out of business? It’s not as good a job option as it used to be, and I fall into the category of the ones that have had a lot of professional orchestral experience but clearly that wasn’t the right world for me. ... It’s a very, very interesting time.”

To top it off, RVSQ’s Nov. 14 concert at Salons at the Rex presented by San Francisco Performances is the sendoff for its tour through the Balkans and Eastern Europe. The concert is sponsored by the U.S. Department of State’s American Voices program and a nonprofit organization called American Music Abroad.

“This group is the most satisfying group I’ve been in because of who we are as people. I feel lucky because I’ve found musical soul mates, people who really share the same kind of interests and keep on expanding,” said Sazer. “I just feel like I’m working with a very mature and very intelligent, trustworthy group of people. For me, that is the best of both worlds.”