Traditional notions of “summer fun” evoke a host of images: beach balls, barbecues, baseball. Music lovers should add to this list of B’s the name Banchieri — as in Adriano Banchieri, an Italian Renaissance composer and a pioneer of the madrigal comedy, a collection of madrigals strung together to present a comical story. In what will surely be a spirited affair, San Francisco Renaissance Voices presents “The Bawdy and the Chaste,” a concert featuring Banchieri’s madrigal comedy Festino nella sera del giovedì grasso (Entertainment for the eve of Carnival Thursday) along with Palestrina’s Missa Sicut lilium inter spinas in two 7:30 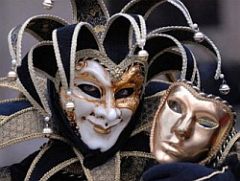 Few events can match the Carnival of Venice for sheer decadence. Since medieval times this annual celebration has blended civic festival, public holiday, and colorful masquerade to create a spectacle of unrivaled resplendence. The festivities could easily devolve into raucousness, with rivalries between geographical or religious factions played out through bull fights, street races of oxen and pigs, or even physical combat.

Although SFRV’s performance probably won’t lead to fisticuffs, Banchieri’s Festino should offer a heavy dose of the Carnival spirit. Originally composed as dinner entertainment, this madrigal collection incorporates everything from commedia dell’arte high jinks to an aesthetic debate on the virtues of newer versus older music. (For the record, Banchieri comes out firmly on the side of the avant-garde.) According to SFRV Music Director Todd Jolly, “The piece is just as entertaining today as it was in 1608 when Banchieri described his opus as ‘modern music,’ and will give our audiences a sense of the celebration of the Carnival of Venice.”

In stark contrast to Banchieri’s bacchanalia, Palestrina was the undisputed master of the refined prima prattica (first practice) that defined 16th-century Italian sacred music. Although he is just the kind of composer Banchieri might have faulted as old-fashioned, his pure, graceful, and elegant style has masterfully stood the test of time and remains extremely popular even to this day. Hearing one of Palestrina’s lesser-known masses, juxtaposed against the more boisterous Banchieri, offers an ideal window into the stunning diversity and craftsmanship of the Italian Renaissance.

But don’t go just for the music; go also to experience SFRV’s uniquely flamboyant performance style, a standout within the crowded field of Bay Area early music ensembles. Jolly takes particular delight in enlivening the traditional concertgoing experience using costumes, staging, and other theatrical devices. For the upcoming set, Jolly reports that the ensemble will be masked and in costume for the Banchieri, and also joined by distinctive guest artists including local actor Rick Homan, performing the narrative parts that Banchieri himself would have performed, plus members of the Celtic-tinged early music ensemble Brocelïande playing recorders, harp, and octave mandolin.

On a final note, one audience member will have a special chance to participate more directly in the festivities. For each performance, a raffle will be held and the lucky winner gets to appear onstage for a special cameo. No singing required — just a Carnival spirit.