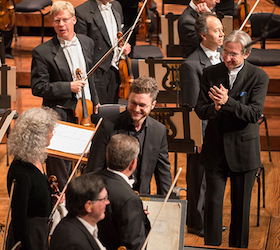 It's rare that a major American symphony performs works by a parent and child, who are both prominent living composers, within a short span of time. That will be the case when the San Francisco Symphony plays pieces by Samuel Carl Adams in November and by his father, John Adams, in January and April concerts as part of their 2014-2015 season.

Works by the Adams are just some of the offerings music director Michael Tilson Thomas has programmed over the the next 10 months. This is the conductor's 20th year collaborating with the symphony and he has created a season that showcases his artistic synergy with the orchestra and chorus.

"For more than 40 years I have had the honor of working with the great musicians of the San Francisco Symphony," said Tilson Thomas in an email. "I am constantly struck by their virtuosic and impassioned spirit. Our personal approach to music making has grown over time and my affection and respect for their character and skill has never been stronger."

Tilson Thomas is hitting another milestone this season. He's turning 70 years old in the new year, and a musical celebration on January 15, 2015 at Davies Symphony Hall in his honor is planned with guests still to be announced. 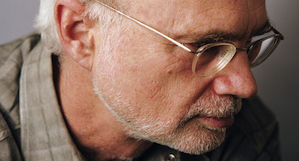 Season highlights include a Beethoven festival next June, the orchestra's live accompaniment to films, from family favorites (including a holiday showing of Home Alone) to a cinema classic, and a spotlight on American composers.

Intriguing musical pairings are found throughout the next ten months, such as Mason Bates' Alternative Energy and Ludwig van Beethoven's Piano Concerto No. 1 with Tilson Thomas at the podium, Sept. 10-13.

One of the great rewards of a long partnership between a conductor and an orchestra is the opportunity to explore works in great depth, according to Tilson Thomas. "Just as we continue to examine the music of Beethoven and find new pathways into hearing his work," he said, "it is important to develop and support composers writing today."

The award-winning, 37-year-old Bates often adds electronic sounds, rhythms, and textures to his orchestral and chamber works. In an interview with a German music blog, the California-based composer said Tilson Thomas didn't program his work with Beethoven simply to contrast something old with something new. 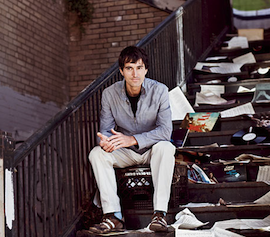 "I think that what he felt my music would bring to his focus on Beethoven was a kind of fairly bold embrace of a new kind of language but in a way that certainly has historical roots," Bates told the German music software maker Abelton, referring to the Beethoven-Bates concerts the symphony performed in early 2014. "Already in the fifth symphony Beethoven was kind of breaking down the movement divisions almost like Pink Floyd did with the song unit in their concept albums."

Musical collaborations play an integral role for the symphony. "We have been able to develop creative partnerships with composers over the course of their careers, such as our continued explorations of the music of Bay Area composers John Adams and Mason Bates," said Tilson Thomas. "Ongoing relationships with composers, present as well as past, are inseparable from our work together as musicians and open new dimensions in our music-making."

Alternative Energy opens in a rustic Midwestern junkyard in the late 19th century, and then time travels to a present-day particle collider before moving on to a futuristic Chinese nuclear plant before ending in a future Icelandic rainforest, where a small group of humans seek a return to a simple life, according to the symphony. Sounds outside the regular symphonic palette that Bates uses in the piece include "junkyard percussion" to simulate a car motor's cranking in the first movement; recordings from FermiLab’s particle accelerator in Chicago in the second movement; and techno beats in the third movement to illustrate China in 2112.

"In my music, the electronics not only offer techno rhythms," Bates said, "but, more importantly, they offer a narrative approach, i.e., you're standing next to a melting glacier, or you're inside a spinning particle accelerator."

As part of the season's spotlight on American composers, Tilson Thomas leads the orchestra and organist Cameron Carpenter in Henry Brant's Pulitzer Prize-winning Ice Field, Sept. 18-21. It will be only the second performance of the work, which was written for the symphony and the design of its concert hall. Johann Sebastian Bach's Brandenberg Concerto No. 3 and Tchaikovsky's Symphony No. 5 share the program.

In addition to Shaham, some of the world's gifted violinists will take the Davies Symphony Hall stage, including:

In June, Beethoven takes center stage in a three-week festival. It will feature concert performances of his only opera, Fidelio, and a semi-staged production of the epic Missa solemnis.

Sprinkled on selected Saturday nights from September to April are a series of four films accompanied by live orchestra. The series lineup is The Wizard of Oz, The Godfather, Gotta Dance, the greatest dance sequences of the silver screen; and Tan Dun's Martial Arts Trilogy, which features selections from Crouching Tiger, Hidden Dragon, The Banquet, and Hero. The film series sold out last season. The symphony suggests a subscriber package to ensure tickets and best seats. It's an offer Don Corleone might not refuse.