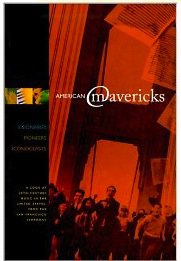 The S.F. Symphony’s maverick-composer concept is about as slippery as a greased dogie, for it includes mainstream as well as outlier voices in music. More often than not, this means composers who were writing music that didn’t follow the “rules” of the time, but who are now recognized as fully worthy of our attention. You can download a free 82-page book about this concept that was put together after the 2001 festival.

The first and third concerts include the fine composers but dubious mavericks (in the free-range sense) Aaron Copland, John Adams, and Mason Bates, along with the more avant-garde (for their time) Lou Harrison, Charles Ives, Morton Feldman, and Edgard Varèse. For the purest maverickism, attend the second concert honoring four rule-breakers and featuring top-notch artists.

If ever there was a maverick composer, in my view, it was Lukas Foss, who owned a prodigious talent while writing music that was so all-over-the-map that it was sure to offend someone. The Symphony will have a fun time performing his Phorion (Greek for stolen goods). Written in 1967 at the breakout of postmodernism, the piece subjects the notes of Bach’s Violin Partita in E Major to chance operations among strings, guitar, harpsichord, and organ. Or, as Foss put it, “torrents of Baroque sixteenth notes being washed ashore by ocean waves.”

Also on the program are Henry Cowell’s piano concerto; Carl Ruggles’ wake-up call for the ears, Sun Treader; and songs from the maverick who inspired herds of others, John Cage. If you choose this concert, you’ll be in clover.