Day of the Dead Thriller at S.F. Symphony 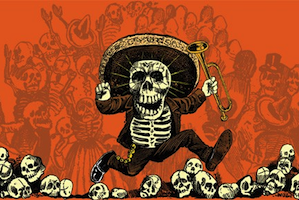 What better way to enjoy the bizarreness of the Day of the Dead as an overture to the holiday season than with The Composer Is Dead, commissioned by the San Francisco Symphony and first performed in July 2006.

The 30-minute piece, a murder mystery for orchestra and narrator, was composed by Nathaniel Stookey, with narration written by Lemony Snicket, the pen name of Daniel Handler, the novelist best known for A Series of Unfortunately Events.

The Composer Is Dead, which has become one of the top five most performed classical music pieces written in the new century, will be narrated by Stookey, in Spanish translation no less, with English subtitles on a screen behind the orchestra. 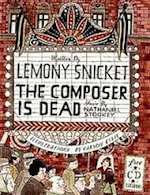 We reached Stookey earlier this week who explained that SFS had asked that the narration be done in Spanish and he volunteered to do the translation having lived in the Basque part of Spain for a couple of years.

Stookey, 43, grew up in San Francisco. He went to Lowell High School for a year — where he met Daniel Handler — went abroad to study, and then returned to graduate from the International School, where his mother was a teacher. He would go on to study music at UC Berkeley and eventually get a Ph.D. From Duke. In addition, he spent three years with the Halle Symphony Orchestra in Manchester, England.

“Although it does serve as an introduction to the world of the orchestra, we wrote this piece less for our children’s generation than our own generation,” said Stookey who has two children of his own, 10 and 13. “Our intention was to draw people in and basically rivet them for half an hour, to take them for a ride. But it was always very much directed toward an adult audience. That kids like it is an added dimension. I would say the target audience is between 30 and 40, but kids above the age of 6 can appreciate it.”

"The Composer is Dead was always very much directed toward an adult audience. That kids like it is an added dimension." - composer Nathaniel Stookey

Stookey is very proud of the fact that the piece has become so popular and notes, “I wrote it for musicians; it’s really a love letter to the orchestra.”

The piece includes excerpts from many of the world’s great composers and those excerpts are cast as originally written. Other parts of the piece Stookey wrote much as theater music, ranging across several genres, including a scene in a nightclub that includes both Latin music and techno.

“I was more interested in making people feel they were in a particular place than to suggest a style. In that sense I wanted to created a rich dramatic experience.”

Lobby doors open at 1 p.m. with an offering of refreshments and live performers celebrating the Day of the Dead. There will be various events for children including face painting, a scavenger hunt, paper flowing making, sugar skull decorating, and more. The concert will last 90 minutes and include one 20-minute intermission. Tickets: $20-$68. Half price for ages 17 and under. Tickets are available at sfsymphony.org, by phone at (415) 864-6000, and at the Davies Symphony Hall Box Office, on Grove Street between Van Ness Avenue and Franklin Street in San Francisco.