Three years ago, the San Francisco Symphony programmed a family concert to meet the artistic needs of the city’s Latino community. Although the organization had dabbled in Latino programming before, with single-ticket events celebrating holidays like Cinco de Mayo, this concert was of an entirely different breed.

“The symphony started this concert with a little bit of reservation,” explained Martha Rodriguez-Salazar, curator of the Symphony’s “Dia de los Muertos” family concert. “They didn’t know what to expect.”

Like many of the programs offered in the Symphony's Music for Families series, Día de los Muertos provided a compelling musical experience that focused on various aspects of the orchestra.

Symphony programmers were surprised by the concert’s reception. “Davies Symphony Hall fits 2,300 people. [There were] close to 2,000 in the first year,” recounted Rodriguez-Salazar. “The second year there was maybe 2,000-and-something.”

Years later, “Día de los Muertos” has not only amassed quite the following but has grown in grandeur and scale. Symphony members have partnered with local organizations to ensure that this year’s concert will “knock ’em dead.” 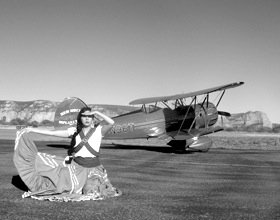 “Día de los Muertos” boasts a rather impressive pre-performance frenzy. “This celebration has to do with the tradition of ‘Día de los Muertos,’” Rodriguez-Salazar explained. “It’s a happy event.”

This year’s concert, Nov. 6 at 2:00 p.m., honors female soldiers, or Las Adelitas, who fought in the Mexican Revolution. At 1:00 p.m., the Ballet Folklórico Mexicano de Carlos Moreno and Mariachi Colima will perform in the Davies Symphony Hall lobby. Performance artist Jenny Priego will greet patrons as her character “Adelita Pata de Perro,” and performers from the SinCuenta Art Collective will roam the lobby costumed as “Coronelas” and “Catrinas” in Day of the Dead–themed face paint.

Preconcert festivities provide a feast not only for the ears but also for the eyes, touting a celebration of Mexican visual arts and altar-making. Inside the hall, audience members can catch a glimpse of Victor Mario Zaballa’s Rueda de la fortuna sculpture (translating to “Wheel of Fortune”). Also on display is an exhibit of Day of the Dead imagery by a renowned Mexican printmaker, José Guadalupe Posada. 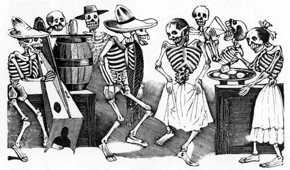 A photo-friendly 3-D altar honoring Posada was created for preconcert festivities by artists René and Rio Yañez. Inspired by Silvestre Revueltas’ La coronela, a piece performed at the concert, local teens and youth working under the distinguished tutelage of artists Elena Finestone and Colette Crutcher have constructed an altar dedicated to the Mexican Revolution.

Artist Irma Ortiz will be on hand to give a Mexican sugar skull–making demonstration. Other preconcert activities include face painting and stamps, tin, and paper flower art. Complimentary Day of the Day bread — pan de muerto — and Mexican hot chocolate will be served.

“That’s how we honor the dead: in a happy way,” Rodriguez-Salazar quipped. “How? By playing music, by dancing, by putting up altars, by activities for the kids!”

The concert itself will be a lively affair. Led by Resident Conductor Donato Cabrera, the orchestra will perform pieces largely composed by Mexican artists. Silvestre Revueltas’ La coronela promises to be its standout performance.

Much of Revueltas’ adolescence was spent in the throes of the Mexican Revolution. For him, music
established a national identity — La Coronela honors this tradition. The piece is a four-part balletic arrangement that follows the story of Mexico’s troubled working class and its ultimate liberation from a decadent, oppressive bourgeois.

Fernandez referenced the score in the creation of his 15-minute performance. Although challenged by the limitations of a stage shared with full orchestra, Fernandez filled what would have been a flat, linear space with the ethereal, dominant, and militaristic moves of La coronela (The lady colonel).

“The concert celebrates the arts,” Fernandez explained. “[This] is not confined to a woman’s point of view. Whether man or woman or Latino character ... this is about the human spirit, the human condition.” Fernandez shared his hope that the performance will bring a larger audience into the company. “There’s a very diverse community in San Francisco [that] will be open to see it,” he explained.

The Symphony has gone to great lengths to ensure that performances are available and accessible for everyone, including the Latino audience. “I think one of the challenges is [getting] music that somehow relates to ‘Día de los Muertos,’” explained Rodriguez-Salazar. “It has been hard to find pieces that fit into the celebration and that aren’t long or difficult for the audience.” Programmers have also been challenged in reconciling centuries-long Day of the Dead traditions with the wealth of contemporary Latino compositions available. “My hope is that [Latino music] is going to happen more frequently in the programming of the general season,” said Rodriguez-Salazar on the future of artistic programming.

Given the woes of financial instability and dropping subscriptions facing orchestral organizations throughout the nation — and, for some, causing a tragic closing — perhaps this change in programming is key. Far from being a forlorn hope in sad economic times, Latino programming has been a path that seems to be financially rewarding for many organizations. It is a message that says there are plenty of potential audience members who want symphonies to do more than put on standard concerts of the standard classical fare.

“Día de los Muertos” is far from ordinary. Honoring the dead with outstanding celebration and optimistic overtones, it seems as though symphonic music, at least at the San Francisco Symphony, is very much alive.