Opening the San Francisco Symphony season with Mahler is a safe bet, especially with Michael Tilson Thomas’ passionate advocacy sure to be in force. Thus, his opening series — running September 16, 17, 19, and 20 — offers an all-Mahler program; and indeed, all September’s three weeks feature Mahler’s music. What’s especially interesting about that first series is that it consists of two truncated Mahler compositions: the “Five Rückert Lieder” and the First Symphony, “Titan.” As if to trump even those events, the Rückert songs will be sung by no less than mezzo-soprano Susan Graham. 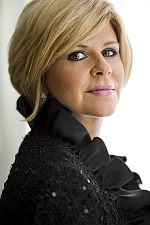 The “Titan” has always been among the more frequently programmed of Mahler’s symphonies. The “Titan” is so standard that it will also be featured on the May 10 program of the visiting Los Angeles Philharmonic, under conductor Gustavo Dudamel.

Few of Mahler's works recommend themselves so thoroughly to a general audience. Tuneful, comic in the grotesquerie of the third movement (a funeral march based on a minor-key transposition of "Fré re Jacques"), and romantically heroic in its sprawling final movement, it testifies to Mahler's later, often-quoted remark that a symphony "should be like the world: It must embrace everything."

But the youthful Mahler also knew what to discard. When Mahler first performed it in Budapest, it was in five movements, with subtitles like "From Inferno to Paradise" (for the last movement.) Eventually, Mahler realized just how corny those subtitles were and dropped them. He also excised a movement, which is sometimes performed under its original German title, Blumine. It's a lovely thing, but without it the symphony clocks in at a manageable (for Mahler) 70 minutes.

The cycle of five poems that Mahler set to lyrics by Friedrich Rückert first saw print in 1905. Four dated from 1901, and one more from 1902. They were published under the title Seven Last Songs. (That last is the score I own.)

But in those editions the Rückert songs were preluded by two settings from the folk poetry of Das Knaben Wunderhorn: “Revelge” (Reveille) and “Der Tamboursg’sell” (The drummer boy). Each centers on military deaths, the first with a large, noisy orchestration, the second slow and thinly orchestrated. Each constitutes a morbid funeral march of sorts. Since the Wunderhorn songs are much earlier, these were eventually reunited with the other songs from that collection.

Try, for example, “The roll-call, lo! The dead comrades muster, grim skeletons all, all ...” in “Revelge.” That would be no way to introduce the Rückert songs, which are about love, blossoms, and light. They equally suit any category of voice, the richer the better. And with mezzo Graham, we’ll surely hear that from the stage.