Can you imagine a group of voices that all move and “think” as one? Can you imagine the pure sound that group could produce? Karen Clark envisioned just that when she formed the all-women quintet Vajra Voices. 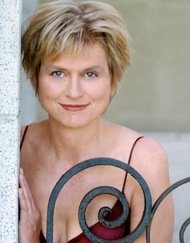 All members of Vajra Voices are students of the contralto Karen Clark. The voices meld perfectly, as they are all crafted through the same technique and energized through a shared interpretation of the text. Clark was inspired by the sound of her students and invigorated at the thought of these voices combined. More, she realized the power of not just combining beautiful voices, but combining beautiful voices that all spoke the same vocal language.

Clark says that the experience of training and rehearsing with the group has been wonderful. One member comments that she leaves rehearsals “very relaxed and in my body.” Clark, a practitioner of the Feldenkrais Method, once again motivates this sense of connection with the body. This body-based method influences her teaching, as well as the ensemble’s rehearsals. Often, rehearsals focus on embodying tone, group breathing, group sensing, and referencing specific anatomy. This focus has empowered the group to move and think as one, even when rehearsing such difficult music as that composed by the remarkable 11th-century composer, author, and political and spiritual advisor Hildegard of Bingen.

Vajra Voices debuted at the 2010 Berkeley Festival and Exhibition of Early Music. The focus of the festival was vespers. Clark labored over combining this focus with her desire to perform medieval music, thus bringing to life “A Medieval Vespers,” featuring the music of Hildegard. Clark pored through a number of texts, identifying those that would be appropriate for vespers and then morphing Hildegard’s work into a vespers service. The text focuses on praise, prayers, and devotion — a perfect mix for the members of Vajra Voices. Clark explains that another motivation for assembling this particular group of singers was that they had all been through hardships. So she chose works that were spiritually uplifting, to give flight to the ensemble.

The choice of Hildegard’s music also offered a unique opportunity to explore the sound of the singers. “There is nothing like singing in unison with a group of women,” Clark comments. The music allows the women to focus on vowels. The works are filled with long melismas and florid passages. The voices, together, sustain and flourish through these passages, truly embodying the “feminine divine.” “A Medieval Vespers” returns on May 21, but likely this time with an ease that was absent in the original performance. In this go-round, the group approached the challenging work with the confidence of a year’s worth of rehearsals and performances. They have also focused on memory work to fully realize and integrate the music. Clark notes that this newfound comfort will prove to be quite a highlight for the upcoming concert. “It is a lovely feeling to embody the music.”