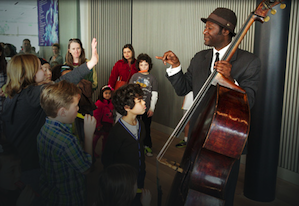 It bears remembering that it was Carter G. Woodson, a prominent African-American historian, who in 1926 announced that the second week of February would be “Negro History Week,” saying, "If a race has no history, it has no worthwhile tradition, it becomes a negligible factor in the thought of the world, and it stands in danger of being exterminated.” A week became a month in 1970.

And how better to celebrate Black History Month than at SFJAZZ, which has become, in just a few years, one of the nation’s great jazz palaces for America’s classical music. But more than a venue, it features a series of outreach programs with education classes, events, and now a “family matinee.”

“Our primary goal is to continue to reach an ever broader and younger audience,” says Rebeca Mauleon, the education director at SFJAZZ.

The February schedule includes Discover Jazz, a four-class introduction and appreciation course; the SFJAZZ Family Matinee, a one-time performance on Feb. 8, featuring the Marcus Shelby quintet; and then, following the matinee, an SFJAZZ workshop.

The Discover Jazz series is in partnership with the San Francisco Jazz Heritage Center located in the Fillmore District and is part of an effort, as Mauleon puts it, “to make sure jazz is still alive and thriving in this part of the city where jazz has always been such an important part of the community. The theme for the series, which includes multimedia presentations as well as Q&A, is “The Promised Land: Spiritual Traditions in African-American Music.”

The course, which is designed for those 15 and older, is lead by vocalist Linda Tillery and will feature a guest artist each week discussing and demonstrating a different aspect of the music. For example, the first class will explore “field hollers” and different types of “roots music”, with the Cultural Heritage Choir. The second class will delve into spirituals; the third, gospel music; and the last class, the spiritual side of John Coltrane — presented by avant-garde alto saxophonist, John Handy.

The Family Matinee (open to small but presumably attentive children) will be hosted by the great bassist Marcus Shelby who will bring to life, in words and music, the ever extraordinary story of Harriet Tubman, born Araminta Harriet Ross in 1820, the woman who was born a slave and went on to free more than 300 slaves using the so-called underground railway. She worked as a nurse and a union spy during the Civil War, and afterward went on to become one of the great heroines of the women’s suffrage movement. The libretto for the matinee is based on the book Harriet Tubman: Bound for the Promised Land (2004) by historian Kate Clifford Larson.

Following the matinee there will be an interactive workshop, mainly for musicians and artists. Marcus Shelby and friends will lead it.

SFJAZZ also features the SFJAZZ High School All-Stars Orchestra, which will play on February 4, 11, 18, and 25. The orchestra is directed by Paul Contos and includes 26 of the very best young Bay Area Jazz musicians. The ensemble has performed at, among many other festivals, the San Francisco Jazz Festival, Jazz at Lincoln Center, and the Monterey Next General Jazz Festival.