Sylvano Bussotti is one of the most distinctive composers to emerge from the postwar avant garde in Europe, but he has received relatively little attention in the U.S. Bay Area audiences will have a rare opportunity to experience a broad sampling of his artistry on December 2, when San Francisco Museum of Modern Art presents Bussotti accompanying his Rara (film), which impressionistically captures Bussotti’s circle of artists in mid-60s Rome. This will be followed by a career-spanning program of his works performed by sfSoundGroup, with the composer joining in. 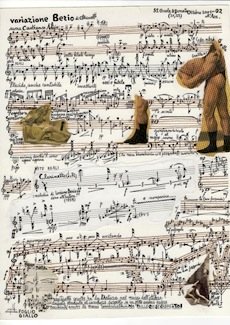 Bussotti, now 79, first drew attention in the early 60s, for music that assimilated the technical innovations of Pierre Boulez and Karlheinz Stockhausen, as well as aspects of John Cage's reconceptualization of the compositional process, but insisted on a highly personal, expressive approach to composition. Over his career he has crossed paths with many of the major artists of recent decades.

This Bussotti program is being curated by Luciano Chessa within SFMOMA’s Now Playing series. Chessa is a composer, San Francisco Conservatory faculty member, and musical consultant to the Italian Cultural Institute, which is co-sponsoring the program. When asked how the project came about, Chessa said

“It's the result of years spent studying Bussotti’s work. When in the mid-80s I decided I would become a composer, Bussotti was a very well-established figure in Italy, popular not only as a composer, but also as a seminal visual artist, director and stage/costume designer. In his long career he has directed and designed operas at [Milan's] La Scala and L’Arena in Verona, and has been the artistic director of La Fenice in Venice, the Venice Biennale, where he collaborated with Derek Jarman, the Puccini Festival in Torre del Lago, and so forth. Bussotti is one of the few contemporary composers who has become known beyond the circles of contemporary music.

In Bologna in the 90s I used to curate a concert series in a large industrial warehouse where you could attend performances of experimental theatre, DJ live sets, stuff like Shellac, Massive Attack, Aphex Twin, John Zorn, etc. and, almost every month, a rave party. My approach brought contemporary classical concerts to this series. It was thanks to my teacher at the Bologna Conservatory, Francesco Carluccio, that I had the opportunity to meet Bussotti in person for the first time.

When I presented at Link Project an unforgettable all-Bussotti concert featuring pianist Mauro Castellano, and learned that he had made films, I asked Bussotti about the one titled Rara (film). Reading about this film had piqued my curiosity, as it featured an impressive cast, and cameos of opera singer Cathy Berberian, comedian Franca Valeri, young actress Daria Nicolodi, writers Dario Bellezza and Dacia Maraini, and up to 24 actors of The Living Theater.

The film includes some striking footage of The Living Theater performing circa 1967, as well as cameos of Berberian — with whom Bussotti was very close up until her death — singing his music. Even though the film is not intended to have a narrative, the shape is compelling, with a formal climax emotionally reached in the sequence of filmed portraits of men crying.

Rara (film) was shot in Rome in the years immediately following of Fellini’s La dolce vita, and just like La dolce vita it contains moments of child-like innocence, pure, thoughtless happiness, but also eroticism, and an element of subtle desperation. Both films were produced in the '60s, the decade of the Italian economic boom; artists were the first to realize that something just wasn’t going to last.

While they lasted, the '60s must have been rather exciting times in Rome, with high percentages of talent per square meter, and so many expats. The film exposes this excitement by involving a number of these talents. But though I surely love the opportunity to look at Rome in those years, Rara (film) is not intended as a documentary. It is a plotless, experimental film which is deliberately silent, and driven by the camera work and an editing technique at time angular and wry, always refreshing and lighthearted, even, with hints of nouvelle vague.

So Sylvano said to me “I have this film but it’s in disrepair.” He was at the time still living in a villa in the Roman countryside. I went to visit him and took a look at it: I really wanted this film to get out. Sylvano basically told me: “If you can find a place to restore it, why don’t you take all the reels?” Bologna in the mid-'90s was already a major center for film restoration because of L’Immagine Ritrovata from the Cineteca di Bologna. It was also the home of the Charlie Chaplin Archives, and a place where major restoration of Chaplin’s classics, approved by Chaplin’s estate, were (and are) taking place alongside restorations of experimental films, etc. So, with the help of my friend, Daniele del Pozzo, I scheduled a meeting with Vittorio Boarini, director of the Cineteca.

It wasn’t a quick process. For over a year I kept all these mismatched and sometimes wrongly labeled film reels under my bed in my student dorm room in Bologna! So as I left Italy to come to study in California, the process stalled for a few years before being picked up again by Daniele, who meanwhile had started a festival called Gender Bender. About 10 years later, Daniele closed the deal with the Immagine Ritrovata and finally presented the newly restored film in 2007. Thursday’s performance will be the U.S. premiere of this restored copy. 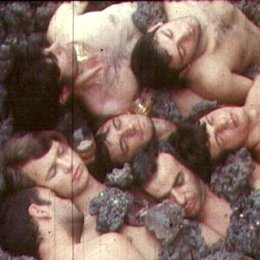 Why, you may wonder, did Bussotti make a silent film? Chessa answers that the reason may be that some of the experimental works that influenced him were silent.

“A large portion of the film is made of closeups: because sometime we are left without context, and we are left without the key to really read these shapes, the discourse veer towards the abstract, with colors and unrecognizable shapes dominating your experience. Probably the most moving part of the film is a long sequence of men crying. Throughout this sequence, it becomes more and more ambiguous whether they’re crying, or if it’s raining, or if pearl-like appliques are used as make-up, etc: this process, especially when it’s up so close, makes you really question what you’re really seeing.

I don’t know why it was silent, but I suspect it was mostly because many of the films that inspired Sylvano to try film, say, Stan Brakhage, were silent. The Director of Photography was Alfredo Leonardi, who was well established in Italy’s blooming experimental film scene, and was friends with a number of American film makers that our Bay Area Film buffs would surely be familiar with, between Brakhage, Robert Beavers, and Gregory Markopoulos.

The film was produced as a silent film, and I know of at least three ways he scored it. At first he would sort of DJ over it, playing recordings of his music, though at the Roman premiere there may have been live performance, too. In the late 60s and 70s, I think he would mostly do that. Then he envisioned a presentation of the film, which he called “Rara (film), watched from the piano by its author.” With this presentation, in which he would play very sparse musical cues, the intention was to offer the audience a performance in which you would watch the author watching his film from the privileged perspective of a piano on stage.

For the 2007 premiere of the restored version Bussotti wrote a new score for chamber ensemble. However, of the three versions, it is the second one that I thought was more intriguing to me to present at SFMOMA, because it’s the version that brings the experience more frankly into the realm of performance art, and connects the work with late-60s performance art practices. Pasolini, for instance, did a screening of his 1964 Gospel According to St. Matthew where the author was the screen itself, with the film projected onto his chest.

About the music that sfSoundGroup plays during the film, Chessa says:

“I envisioned this concert as a theatrical performance in various stations, similar, in a way, to medieval religious street theater. I worked out the details with Matt Ingalls from sfSound along these lines. I thought that every piece could be performed in a different angle of SFMOMA’s Atrium, with simple spotlights to mark each station and the audience free to move (silently, we hope) from one station to the next.

At the beginning of the concerts, the pianos are distant from each other, placed in two distinct areas of the Atrium. Around either piano, in alternation, the pieces of the program will be performed.

Bussotti will play in Geographie francaise, for soprano and percussion, with Laura Bohn as the featured vocalist. Only at the end, the two distant pianos will meet and embrace in the center for the closing piece, Tableaux Vivants (avant la Passion selon Sade) (1964), for two pianos. It is a furiously demanding piece, but also, as we said above, a pivotal one. I basically built the program around it, and so it made sense to return with this to the center of the Atrium, with the same attitude we started with to bring the program to a close. The piece is a beautiful way of staging intimacy, and so it is particularly fitting that the two pianists, Ann Yi and Christopher Jones, are husband and wife.

In the last page of the score of Tableaux Vivants, after the last notes, the players are told to close the score and start playing again from memory. The performers are instructed to keep playing the piece, as much as they remember of it, and fade away when they remember no more. Because of the demanding nature of the score, the result is that of a large structure that progressively collapses. This abandonment to memory and to the progressive entropy of forgiving gives us, perhaps, Bussotti’s most moving page of music.