Singing the Ale Songs of Auld 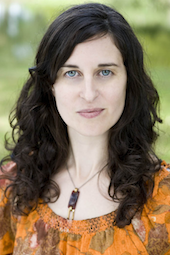 Countertenor Justin Montigne is hardly a country-and-western singer, but he’s learned to mix ballads and beer as a member of the Fill-A-Steins, about to celebrate their second round in the annual Drinking/Songs event at the 50 Mason Social House, on May 29th.

“Nothing greases the wheels like the magic combination of music and alcohol,” comments Montigne, whose “choral home” is the Clerestory vocal ensemble, mostly former Chanticleer singers who’ve focused on Renaissance polyphony. It was over glasses of wine with fellow chorister Jesse Antin and writer and broadcaster Chloe Veltman that Drinking/Songs took shape last year, but the concept had deep and wide historical roots.

“As far as I know, every culture brews beer or a version of beer,” says Veltman, whose pronunciation of the beverage reflects her own roots in England. “And almost every culture we looked at also had drinking songs. So we came up with this idea of trying to tell people the story of the relationship between drinking beer and singing songs, in a bunch of different cultures and contexts.”

Veltman has “always been a singer, but a journalist by background, and I do a lot of writing about the arts all over the place.” With a particular interest in the voice, Veltman became host and producer of VoiceBox, a weekly program on KALW-FM, with a mission “to encourage people to get out singing more and listening across regular genre boundaries.”

Veltman envisioned the Drinking/Songs project “to test out the idea of a live event within a journalistic setting.” Toward this end, she developed a narrative script for the first event, Montigne and Antin recruited additional singers, and an appropriate venue was sought. 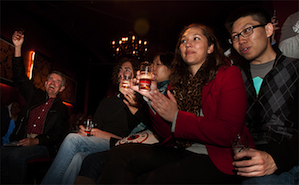 “I wanted a bar-like setting, because I thought it would resonate more with the spirit of the event,” says Veltman. “I didn’t want to go into a theater or a drafty hall.” A friend suggested the 50 Mason Social House in downtown San Francisco, which “hadn’t been open for that long and was looking to increase their profile, and was a music venue as much as an artisanal beer venue. I was able to guarantee that the place would be packed, and that people would be buying beer from their bar before the event, during the intermission, and afterwards.”

The inaugural Drinking/Songs was well-received, but the second event features some changes. Visiting the headquarters of The New Yorker in The Big Apple, Veltman was made aware of the magazine’s profile of Sam Calagione, founder of the Dogfish Head Craft Brewery in Delaware. She invited Calagione to be this year’s exclusive “beer partner,” and he quickly agreed. The arrangement was applauded by Sayre Piotrkowski, who’d functioned as Drinking/Songs’ cicerone, a term for a certified expert and guide to beer and brewing, comparable to a wine sommelier.

Chloe Veltman's mission: “To encourage people to get out singing more and listening across regular genre boundaries.”

As he did the first time around, the cicerone will be “talking beer” to the Drinking/Songs attendees on the 29th. “At the last one, there was a lot more education that needed to be done by me, because we had beers from all these historic brewing traditions,” Piotrkowski points out. “This one, though, is focused entirely on IPAs — India Pale Ales — which we’re much more familiar with. I’ll give the brochure talk about each beer as people drink it, and a kind of an overview of how the IPA status came to be.

The IPA was originally a solution to a problem: How do we get beer to still be drinkable at the end of a long voyage?” 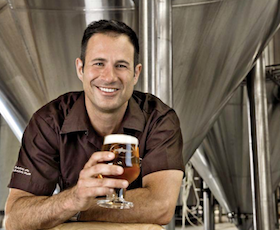 “It came from England, and then it moved to the colonies, and it was specifically made to be able to travel long, long distances,” adds Veltman about IPAs. “It kind of spread through the British colonies, and became particularly popular in the United States.” To sustain their appeal during transport, all IPAs were “heavily hopped” during the brewing process, explains Piotrkowski, with hops also added after boiling to “contribute a very clear and obvious hop aroma to the beer.” Dogfish’s Calagione patented a device which continuously hops the brew throughout the entire boil.

“We’ll have a few more songs than last year, so there’s a more concerted focus on the music,” promises Jusin Montigne. “The music is driven by the choice of beers, and it’s all essentially from the British beer stock, so a lot of our music will come from that British tradition. You’ll probably hear the Wassail song, which was arranged by Ralph Vaughan Williams; we’ll pair that with a particularly plummy British ale.”

“For the American-style beer that has maple syrup in it, we’re gonna do a song that was made famous by a Vermont folksinger [John Cassel], called Sap Beer,” Montigne continues. “Last year we did a British drinking round, and we haven’t quite decided which one of these we’ll do this year, maybe Eccles or Ravenscroft, but that’ll be for the standard, quintessential IPA. There is one song that has a verse-and-chorus style, and we’ll try to get [people] to sing along with us. Any time you ask an audience to participate, there’s like one nanosecond of hesitancy or fear, followed by total abandonment and enjoyment. And a little bit of beer helps, because everybody’s feeling their spirits, as it were.”

A San Francisco-based application developer, Smule, will be brought in this year to distill something new out of the spirits of attendees. “Smule makes these amazing music apps,” says Veltman, “and we’re gonna be working with them to crowd-source drinking songs during intermission, using their MadPad. It’s an app for a tablet, and they’ll go around and capture little chunks of audio and video from people and mix them together to create this instant mashup in a drinking song, with images to match, that will be projected on a big screen. It will be a way of getting everybody involved.”

This year’s event will also have an exclusive VIP section: For a higher price you can arrive early, enjoy saved seats and other treats, including a special talk with Piotrkowski, a private drinking song session with the singers, and one extra beer tasting.

“There’s a good story to the whole evening, and Chloe does a good job of telling [it],” says Montigne. The event will be recorded by an experienced KALW team and later aired on Veltman’s VoiceBox program, as well as on a podcast. “Folks will be able to hear anything they might have missed at the event because they were laughing.” Better make sure you’re there to laugh, sing, and sip with them.