Musica Poetica: The Baroque Before Bach

Two years after declaring its independence from Sonoma State University, where it was founded in 1991, Sonoma Bach is now ready to showcase what Music Director Robert Worth, formerly a professor there, calls the “prehistory” of its namesake High Baroque composer. The source of material for the organization’s third annual springtime Early Music Festival is traced to Northern Italy, while the festival’s appellation, “Musica Poetica,” is borrowed from the title of a book by a German poet, composer, and music theorist named Joachim Burmeister.

“It was about how to be expressive in music,” says Worth about the 500-year-old book, “and what I was stuck by was this wonderful quote: ‘Music poetica is that discipline of music which teaches how to compose … in order to sway the hearts and spirits of individuals into various dispositions.’ Isn’t that beautiful?” 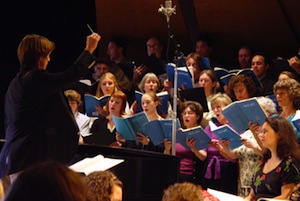 The beauty, suggests Worth, was engendered in part through artistic exchange, in the latter 16th and early 17th centuries, between German-speaking nations and Italy. “A lot of northerners had gone south to learn, with people like Heinrich Schütz spending two years in Venice, studying with Gabrieli and publishing Italian madrigals. But the ones who didn’t go down there still partook largely of this style. And also, some of the Italian musicians came north.” (Musicologist Susan Harvey will discuss this historic exchange in a pre-festival lecture, on April 19.)

This year’s festival will also involve a bit of travel for Sonoma Bach’s four ensembles and visiting musicians, as well as for their audiences. The concerts take place all over Sonoma County, at churches of various denominations.

“The first concert [on April 28] is called ‘Musica Transalpina,’ and will be at Holy Family Episcopal Church in Rohnert Park, with very nice acoustics,” relates Worth. “It features our Live Oak Baroque Orchestra (LOBO), led by Elizabeth Blumenstock. When we went independent and became our own nonprofit, with a real board, we formed our own orchestra, using a lot of people who play with Philharmonia [Baroque Orchestra] and the American Bach Soloists, and other ensembles from around the Bay Area.” This opening concert will also involve the one-on-a-part Monteverdi Consort, with Worth (a baritone/bass) as both director and participating vocalist. The program includes good-natured selections from Heinrich Ignaz and Franz Biber, along with celebratory material by Johann Heinrich Schmelzer. The following afternoon, the same program moves over to St. Andrew’s Presbyterian Church in Sonoma, which “would be our home, if we could swing it.”

The “Musica Poetica” theme, suggests Worth, “is epitomized in Heinrich Schütz, probably the most famous composer we’re featuring, outside of Biber. His music is sublimely expressive, even when he’s honed it down to this very spare motet style, and his ability to adapt musical line to thoughts and images is definitely madrigalian and very, very powerful.” Schütz is showcased on May 4 and 5, alongside Johann Hermann Schein, Bach’s predecessor at Leipzig. The title of the two concerts at Petaluma and Rohnert Park, “Four Months and Eighty Kilometers,” refers to the two composers’ closeness in age and geography, and by extension their friendship. The Circa 1600 chamber chorus, which Worth directs “from a singing position,” will be accompanied by organist Charles Rus, visiting from Seattle.

“Music poetica is that discipline of music which teaches how to compose … in order to sway the hearts and spirits of individuals into various dispositions.” — Joachim Burmeister

That same weekend, Rus will present “Bach’s prehistory, seen from the perspective of the organ,” in a recital at the Church of the Incarnation in Santa Rosa, under the title “Great-Grandfathers of the Baroque.” The program will include fantasias and short pieces by Bruhns, Scheidt, Praetorius, Sweelinck, Scheidemann, Buxtehude, and Bach himself.

“Then we finish with Scheidt and Praetorius, whom I have not done enough of,” says Worth about the closing weekend concerts, presenting vocal works in both German and Latin on May 12 and 13 at Rohnert Park and Sonoma. “Praetorius’s Magnificat ut re mi fa sol la is what you’d call a hexachord piece, using the ascending and descending scale as a cantus firmus, and it’s just a tour de force. We’ll have a double consort — Whole Noyse’s early brass, and the LOBO Baroque strings — so we have lots of tonal possibilities. We can have a pretty big continuo section, or antiphonal doubling, with the strings on one side and the brass on the other side. It’s just kind of a dream for someone like me, because most of it wasn’t specified as to who plays what, and I get to choose.”