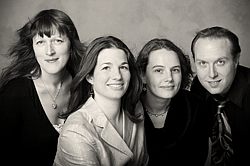 Sure late summer can make for lean pickings in concerts. But there are a few good ones happening. This weekend, Les grâces, an early music group featuring SFCV's own Jonathan Rhodes Lee on harpsichord and Rebekah Ahrendt on gamba, gives another wide-ranging recital of French and Italian music from the 17th and 18th centuries.

Though the names of Louis Couperin, Barbara Strozzi, and Alessandro Scarlatti don't inspire the same veneration as the three Bs, their music is often touching and hugely entertaining. And the afternoon at St. John's Presbyterian won't set you back that much. A free reception follows the performance.