Going back about six decades now, there were Alan Watts in Marin and the American Academy of Asian Studies in San Francisco, the pioneering Esalen Institute in Big Sur, Lou Harrison’s gamelan works from San José and Santa Cruz, Berkeley’s Center for World Music, and countless others.

Northern California has long been a vital crossroad of East–West intellectual, spiritual, and artistic exploration and conflation.

The next journey to this crossroad is Stanford University’s sixth annual “Visions of Asian Music,” held on the Palo Alto campus, Feb. 5-21. 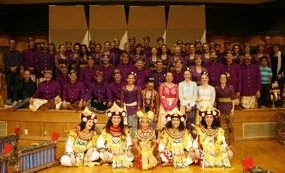 Festival founder and Artistic Director Jindong Cai has put together a remarkable East–West roster for the festival, including:

The festival will also present “elegant gatherings,” with Cai curating evenings of exploration, live performances, and discussion. In collaboration with the Cantor Arts Center and its exhibition Tracing the Past, these festival events will examine music and its relationship to painting, calligraphy, poetry, faith, and healing in Chinese tradition.

UC Santa Cruz’ Lieberman is also calling attention to his school’s hosting of the Pacific Rim Music Festival, April 21-25. Hi Kyung Kim is artistic director of the festival, which will showcase new music by composers from East Asia.