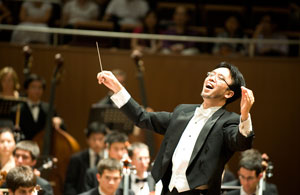 This year, the festival’s 10th anniversary, is marked by four great performances coming up later in the month. On Saturday Feb. 22, the festival features a group from Tibet and on Saturday, March 1, a group from Mongolia. Each group will perform twice: one is a family concert, the other is for, shall we say, a more ambitious audience.

“In art,” Cai said the other day, “we should have the same vision of diversity as we do in this country, and that has been the purpose of this festival: to set up this platform to introduce new artistic ideas from Asia.”

In 2004, Cai, who was born in Beijing, was invited to Stanford University to hold the Director of Orchestral Studies’ Chair and be an Associate Professor of Music in Performance. He is also Music Director and Conductor of the Stanford Symphony Orchestra, the Stanford Philharmonia Orchestra, and the Stanford New Ensemble. In addition, Maestro Cai serves as the Principal Guest Conductor of the Mongolia State Academic Theater of Opera and Ballet.

Each year the Stanford Pan-Asian Music festival has a new focus. This year it’s on music forms from Tibet and Mongolia. Cai visited both countries searching high and low for performers.

“For me the most important thing is to bring the musicians to perform in America; that’s the bottom line, to get them here.”

The Tibetan Opera, Dance, and Music Troupe of Qinghai 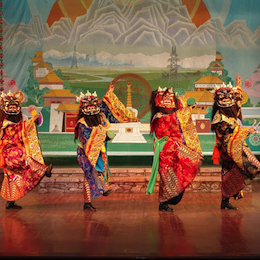 In Tibet, Cai found individual performers from different ensembles and chose those who not only had some virtuosity but also had international experience and, most important, would be permitted by the Chinese government to leave the country.

“It’s not always easy to operate in the political climate in China,” said Cai, “but we have pulled through. Every day I keep my fingers crossed. The goal is always to avoid a political confrontation. But if you talk to the cultural department of the Chinese government they tend to be cooperative because they like to show off the country’s diversity. Remember that there are some 56 minority groups in China and when you talk about Chinese music you have to realize that it is heavily influenced by these minorities.”

Cai added that his leverage with the Chinese government included his affiliation with Stanford University as well as the fact that he is himself Chinese. Moreover, he has established a reputation for being able to separate the arts from politics.

The Tibetan Opera, Dance and Music Troupe of Qinghai will offer three aspects of Tibetan music: folk music and dance; religious music and chanting; and Tibetan opera. Although the performers have no ‘name’ outside of Tibet in some case they are household names in Tibet and parts of China.

The Mongolian State Academic Theater of Opera and Ballet 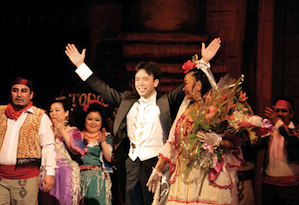 In contrast to the Tibetan program, the Mongolian offering focuses on contemporary music. “I want to show today’s Mongolia and the role music plays in modern life,” said Cai. The group is comprised of 30 singers who will sing some traditional music, but the highlight will be a six-member rock band.

For connoisseurs of this kind of music note the use of the morin khuur, the horse head fiddle, which is made of wood or sometimes the skulls of animals including horses. The instrument, one of the Masterpieces of the Oral and Intangible Heritage of Humanity, has just two strings, the ‘male’ and ‘female’, each made of more than one hundred horsehairs. The sound has been compared to a wild horse neighing or a “breeze in the grasslands.”

Also, you will hear examples of Knoomei singing, sometimes called Tuvan throat-singing, distinguished by the way in which the singer projects various pitches on top of a fundamental pitch. The sound has evolved from human mimicry of animals.

Incidentally, twice a year Cai visits Ulan Bator, Mongolia’s capital and home to 60 percent of the country’s three million people. Last year he conducted both Aida and Verdi’s Requiem — in an enchanting old, European-style theater with less than 600 seats.

“The unique thing about this festival,” said Cai, “is that we are introducing new things from contemporary Asia. We don’t want to just look back but instead see the present as though watching through the back of the looking glass. In fact, we’re neither purely traditional nor contemporary. The focus is on people, on humanity, on what people today are practicing in Mongolia and Tibet. My purpose is to encourage more connection, to enable people to feel more connected to others.”