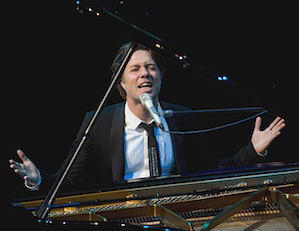 Canadian-American troubador Rufus Wainwright will make his debut at the Stern Grove Festival in San Francisco on Sunday, July 27. The program will feature his signature blend of theatrical pop, cabaret, and classical styles.

“Stern Grove Festival is thrilled to present Wainwright during our 77th season this summer," said Judy Tsang, the festival's director of programming, in an email. "He is an amazingly talented artist and songwriter, and he has a huge fan base in the Bay Area."

The Grammy-nominated instrumental group Quartet San Francisco will open the afternoon with its contemporary crossover sound, which ranges from tango and jazz to Big Band. Bay Area violinist and composer-arranger Jeremy Cohen founded the ensemble in 2001. He'll be joined by violinist Matthew Szemela, violist Chad Kaltinger, and cellist Kelley Maulbetsch.

Following Quartet SF, Wainwright will perform solo with piano. "It will be a wonderful way for the audience to experience his talent in an outdoor venue that still feels so intimate," said Tsang, referring to the stage nestled in a redwood grove ampitheatre.

Through a spokesperson, Wainwright declined a request for an interview, noting the singer wasn't giving interviews during his cross-country tour.

Wainwright, who will turn 41 on July 22, is the son of folk musicians Loudon Wainwright III and the late Kate McGarrigle. He was born in New York but raised in Montreal by his English and French-Canadian mother. Kate McGarrigle was half of the popular Montreal-based singing duo, The McGarrigle Sisters, with her sister Anna. Wainwright's sister, Martha, is also a musician.

The singer-songwriter has released seven studio albums, three DVDs, and three live albums, including the Grammy-nominated Rufus Does Judy at Carnegie Hall, which captured his celebrated Judy Garland tribute performance at the London Palladium in 2007.

In addition to writing popular music, Wainwright composed and co-wrote in French the opera, Prima Donna, with librettist Bernadette Colomine. The work was first announced as a co-commission by the Metropolitan Opera and Lincoln Center Theater. After an alleged dispute with the Met in 2008, the opera was dropped. Subsequently, the Manchester International Festival performed it in 2009. The New York City Opera presented its American premiere at the Brooklyn Academy of Music in 2012 to mixed reviews.

In two acts Prima Donna centers on a great diva's conflict whether to continue her career and is set at the Bastille Opera House in Paris.

This spring Wainwright successfully raised funds on Pledgemusic.com to record Prima Donna with the BBC Symphony Orchestra to be released on a double album on CD and vinyl. "Prima Donna was written and performed during the most dramatic period of my life to date, and considering my life, that’s pretty dramatic," the composer wrote on the crowdsource funding website.

According to his pledgemusic.com page, a portion of funds raised went to the Kate McGarrigle Foundation, a non-profit organization founded by Wainwright and his sister to raise money to fight sarcoma, the rare cancer that took their mother's life in 2010.

The composer's second opera, Hadrian, will premiere at the Canadian Opera Company as their opening production of the 2018 mainstage season at the Four Seasons Centre. Canadian playwright Daniel MacIvor is writing the libretto.

The multi-talented musician is sure to be a draw at this Sunday's performance, according to festival organizers. "Providing admission-free access for everyone to experience a performer of this caliber is why Stern Grove Festival exists," said Tsang, the festival's programming director, "and we are honored to present him on our stage.”