Switchboard Music Festival Turns It On 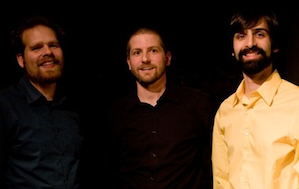 The composer Ryan Brown remembers his days working in a Wherehouse music store when he would pull from a packing box CDs of artists who weren’t the usual musical suspects. Their classification puzzled him. “Are they jazz? World music?” he’d ponder. His common solution was to place the CDs in sorting trays behind a placard marked “OTHER,” where, for the most part, the discs languished, waiting to be discovered.

“They [the CDs] were intriguing and hard to define,” says Brown, in a phone interview from Princeton, New Jersey, where he’s finishing a Ph.D. in music. “No one knew they were there or where to look for them.”

“It’s not a string quartet that throws in a couple of tangos in the middle of their set,” says Brown, describing the type of artist and group who share a Switchboard bill. “These are musicians who are trying to incorporate sounds and styles with an openness to many different musical genres.”

This year’s program on March 24 (2 to 10 p.m.) at San Francisco’s Brava Theatre promises once again to do just that. There are no clear headliners. The lineup features 13 established and new artists from the San Francisco Bay Area and beyond. Some will do 15-minute sets; others will play for half an hour. As well, there are no formal intermissions during the eight-hour program, apart from brief downtimes when a new stage setup is required.

Accordionist Rob Reich (Nice Guy Trio, Tin House and Gaucho) and his quintet kick off the festival with mellifluous compositions that evoke the darting bandonéons of Astor Piazzolla and le jazz hot syncopations of guitarist Django Reinhardt. The visceral jazz harmonies of guitarist Ava Mendoza and her trio Unnatural Ways call to mind some of the musicians with whom the veteran performers have worked, such as Nels Cline. The festival also features clarinetist Michael Lowenstern, Addleds, Areon Flutes, Build, FutureCities, Ignition Duo (who will play a piece by Brown), Oakland Active Orchestra, Billygoat, ZOFO, and Sqwonk. Subharmonic, the high-octane group led by Jazz Mafia’s Adam Theism, closes the evening.

Billygoat, a huge hit at the 2010 festival, returns with live instrumental musical scores, including vocals for the first time, for its two new stop-motion animations. With limited equipment and oodles of time, the group’s Portland-based duo of David Klein and Nick Woolley spent the past couple of years creating the new films in their garage workshop. Each film takes an average of 2½ years to make, including composing its musical score, and usually runs 20 minutes when completed. The time-consuming and intricate process of creating images for the stop-motion animation is what takes so long, Klein explains.

Journal From the Self 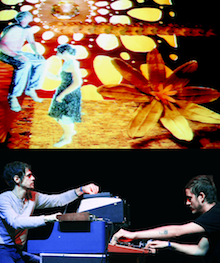 “I see these pieces as moving journals,” says Klein in a telephone interview from his Portland backyard. “They’re very personal … especially Lyric. You’ll be able to feel more about me coming through the piece by adding vocals.” The films, Lyric and Sophia, will be projected on a giant screen at the Brava, an elegant art deco venue in San Francisco’s Mission District.

Klein and Woolley have collaborated since 2006 on projects that combine their shared passions of music, woodworking, and animation. The couple live 24/7 as artistic and life partners, using only cheap cameras, yarn, paint, wood, found objects, photos of friends, a printer, and light to make their films. Klein drew his original inspiration for combining images with soothing music from the work of filmmaker Cecil Stokes (1910–1956), who set out to harmonize abstract, mobile-colored patterns with the emotional qualities of slow music to help calm troubled minds, particularly those of traumatized World War II veterans.

Billygoat’s instrumental music — often including harp, pan flute, and percussion — moves their film’s narrative along with the morphing images on the large screen behind them as they perform on stage. It’s the intent of interactivity with the audience and their film’s original music score, played live, much as for a silent film, that sets their work apart from categorization as animation only, or as only music. “It’s kind of art rock, kind of a movie,” says Klein, of what he and Woolley create. “For the viewer, it’s an experience; you take from it what you will.”“It’s kind of art rock, kind of a movie.” –David Klein

Another duo on the program will share not only the stage but also their instrument, pedals, and bench: San Francisco–based pianists Eva-Maria Zimmermann and Keisuke Nakagoshi form the piano-four-hands group ZOFO. Grammy-nominated for their first 2012 album Mind Meld, the two interpret established 20th- and 21st-century works and also commission new pieces. ZOFO, shorthand for “20-finger orchestra,” will perform with Jeff Anderle and Jonathan Russell of Sqwonk in a new composition by Russell, ZOFORUS REX. This is ZOFO’s first appearance at Switchboard. The festival’s audience-performer loop is part of its appeal for the pianists, according to Zimmermann. “We’re both kind of shy people, but we love to interact with an audience,” she says, in a phone interview.

The audience is encouraged to enter and exit the theater as they wish. A food truck will be parked just outside the Brava, and patrons and performers alike can mix in the lobby to eat, talk, or just soak in the music piped in on a sophisticated sound system. “We really want the audience and the musicians to make connections,” says Brown.

Over the past six years, Switchboard has garnered national attention, and has even become a nonprofit organization. A new move for the festival has been to crowdsource some funding, in addition to garnering foundation support, through the Internet fund-raising tool Kickstarter. “Kickstarter was very successful and helped to defray expenses,” says Brown, of the campaign that raised $8,450.

The Bay Area is already home to a number of marathon, rock-concert style concerts, such as Outside Lands, Other Minds, and Hardly Strictly Blue Grass. So where does Switchboard, a festival created for artists who couldn’t be pigeon-holed, fit? It’s its own niche that hasn’t been filled before, explains Brown. “We’re a home for music in the cracks,” he says, “music that doesn’t fall into traditional genres.”