Symphony Napa Valley: 'Who Messed Up My Orchestra?' 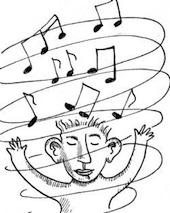 The event, titled “Who Messed Up My Orchestra,” begins with an instrument “petting zoo,” art activities, and a juice and cookie reception. The concert begins at 2:30 p.m. with soprano Carrie Hennessey and Symphony Napa Valley. The concert will feature the music of Beethoven’s Fifth Symphony, Tchaikovsky, Mozart, and Rossini.

“This is an ‘up close and personal’ opportunity for the whole family,” Music Director Ming Luke told us earlier this week.

Before the formal concert, the ever-creative maestro will play the role of a descendant of Beethoven who comes to the podium only to find the orchestra in a terrible mess. Instrument sections are out of place; musicians are in a tizzy. And so the maestro must unravel the confusion, and in the process explain why particular instruments are placed where they are.

These kind of programs for kids include an increasing number of ‘edutainment’ dramas, with both narrative and music.

“Education concerts used to be much the way Leonard Bernstein created them,” says Luke. “He would talk about the music and then play bits, and in his day that was something groundbreaking. But for young audiences now, that approach is less entertaining. They key is to hook children in with a journey or a mystery. At least for me, students get hooked when something goes wrong.”

As he has explored this new genre, Luke has created a fabulous piece about a soprano who loses her rhythm, and so a mystery that enables a chance to distinguish the differences between rhythm and tempo.

The old Napa Valley Symphony had a long tradition of presenting educational concerts, which ended several years ago. Now the concerts are being brought back by Symphony Napa Valley. These include 30-minute ‘lollipop concerts’ for children under five, along with family concerts. Both series will begin in January.

There will be at least 10 Lollipop concerts, which will be held in the Lincoln Theater lobby and possibly other venues. Following the concerts, children will be encouraged to ‘pet’ the instruments.

The Lincoln Theater is located a few miles north of the town of Napa, at 100 California Drive in Yountville. Student tickets are $10. Regular-priced tickets are $20. For more information call 944-9900, or visit http://lincolntheater.com/shows