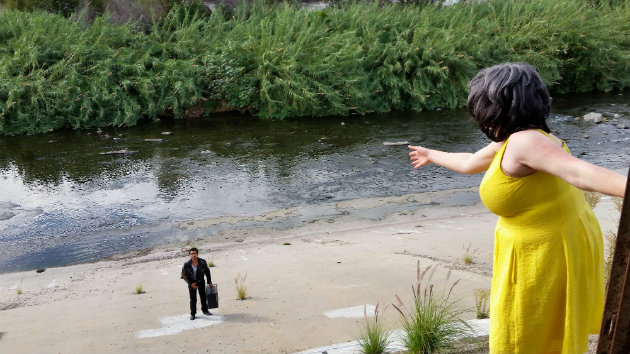 The creative act is not performed by the artist alone; the spectator brings the work in contact with the external world by deciphering and interpreting its inner qualifications and thus adds his contribution to the creative act. —Marcel Duchamp.

Kirsten Ashley Wiest stands on the corner as if frozen in space and time, spectral, a Day of the Dead figure who might have stepped out of a painting by Frida Kahlo. Her face is made up as a deathmask, her long dress is crimson, accentuated by a cascade of golden chains around her neck. Totally silent, she is observed by four “audience” members who are about to embark on the Industry’s mobile opera, Hopscotch.

A long black stretch-limousine pulls up, its roof festooned with rippling red flags indicating this is the Red Route (one of the opera’s three completely different road trips). A production representative in white gloves silently beckons us into the car. Inside sits lyric tenor Orson Van Gay II (as the forlorn artist, Orlando) and a pair of identically costumed violists in blue and white pinafores like twin Alices in Wonderland.

Then Wiest, representing the spirit of Orlando’s recently deceased wife (Sarita) enters the car and sits as a ghostly presence across from him. The doors close. The Alices begin to play. Gay sings a lament to his departed wife as the car glides into one of the oldest cemeteries in Los Angeles.

This is just one of the unforgettable and decidedly surreal moments from Hopscotch, which will have its premiere performances (three a day) beginning on Oct. 31 — appropriately, for the departed spirit of Sarita — on Halloween.

This fantastically complicated project (logistically, musically, and dramatically) is the brainchild of The Industry’s founding director, Yuval Sharon. More than two years in creation, it is a collaboration in the best and wildest sense, featuring a sung and spoken libretto (in English and Spanish) by six writers (none of whom have ever written for opera before): Tom Jacobson, Mandy Kahn, Sarah LaBrie, Jane Stephens Rosenthal, Janine Salinas Schoenberg, and Erin Young; with music by no less than six Los Angeles composers: The Industry’s music director Marc Lowenstein, Veronika Krausas, Andrew McIntosh, Andrew Norman, Ellen Reid, and David Rosenboom.

It is also a production that quite literally stars the city of Los Angeles. And for many people, the experience will be the equivalent of visiting a foreign country as the opera’s three routes (Red, Green, and Yellow) weave their way through the architectural, geographical, historical, and cultural landscape of the city — whether it’s a cemetery in Boyle Heights, the banks of the Los Angeles River, the cramped interior of an Airstream trailer, or the interior splendor of the Million Dollar Theater and Bradbury Building (which were both featured in the film Blade Runner). 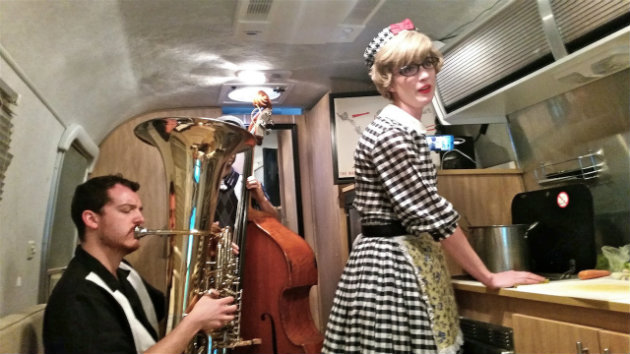 And then there is The Central Hub, an electronic vortex designed by the teachers and students of the Southern California Institute of Architecture, SCI-Arc. Here, for free, anyone can come and watch live video feeds from the cars and locations as they travel along all three routes.

For Yuval Sharon (who may be Orson Welles for the 21st Century) Hopscotch represents his first completely personal project for The Industry. Prior to its creation he oversaw the company’s first site-specific, wandering opera, Christopher Cerrone’s Invisible Cities. That project, which unfolded amid the hustle and bustle of L.A.’s Union Station, combined audience members, singers, musicians and dancers with unsuspecting travelers and the city’s itinerant homeless. If that project seemed complex, Hopscotch is logarithmically more so.

“This production may represent the last semblance of sanity I have left,” says Sharon with a laugh. “Two-and-a-half years ago we thought, what could be more difficult than Invisible Cities? We wanted to continue the idea of introducing Los Angeles to Los Angeles. And that’s when the idea of an opera in cars began to take shape, since cars and Los Angeles are synonymous.”

The original idea for Hopscotch, Sharon says, was sketched out on a table napkin.

“I know it sounds funny, but it’s turned out almost exactly as it was originally envisioned. The idea was that there would be multiple routes that worked their way back to a central point. Two and a half years later we’re doing exactly what we sketched out. Specifics have changed, but the basic idea of an intimate musical experience in cars has remained the same.” 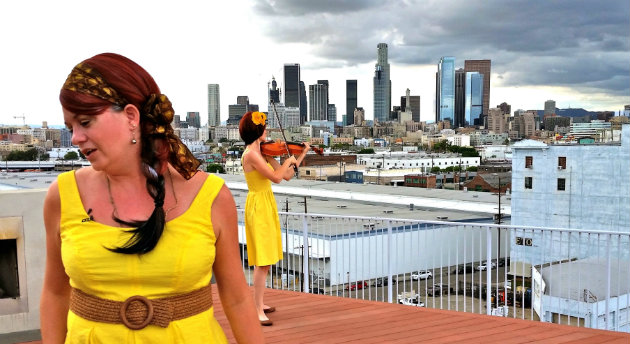 “Cortázar describes the book as ‘an anti-novel’ because you do not necessarily read it front to back,” Sharon explains. “Instead you can follow an alternate path through the narrative beginning with Chapter 57, then going to Chapter 112 and then Chapter 1. So you’re jumping all around the story. It’s very disorienting. And we wanted to mirror that sense of disorientation by jumping from one chapter to another in the lives of the characters.”

After repeated efforts, however, Sharon was unable to obtain the rights to adapt the novel. But instead of a set back, the “failure” turned out to be the production’s liberation day.

“It freed us and allowed us to start over,” Sharon explains. “We could look at the project in a whole new way. That was about a year-and-a-half ago. We created our own 36- chapter storyline that follows a group of Los Angeles residents whose lives intersect. And just as in the novel, the chapters are presented deliberately out of sequence. The only way to experience the complete story is through the synopsis, to travel all three routes, or watch them unfold at the Central Hub. It’s a dream puzzle you put together any way you want and no two people will experience it the same way.”

Another influence, says Sharon, was the 2012 French film, Holy Motors directed by Leos Carax. In the film, from dawn ‘til dusk, a shadowy character named Monsieur Oscar travels through Paris in a white limousine. But each time he emerges from the car he has adopted a new persona as a completely different character. At one point the driver inquires, “What are you doing this for?” To which the man replies, “For the beauty of the act.”

“I loved that,” says Sharon. “That notion that the face of the central character changes every time he steps from the car was inspirational.”

Another influence, says Sharon, was a radical, French theater group in the 1960s, led by Guy Debord, who called themselves The Situationalists.

“They were all about shaking up everyday life. They would take people on these disorienting ‘floating’ walking tours of Paris.”

The 36 chapters focus on a principal trio of characters: Lucha, Jameson, and Orlando. At the same time the myth of Orpheus and Eurydice becomes thematically interwoven. Each character is multiply cast and identifiable by a recurring costume (designed by Ann Closs-Farley and Kate Bergh) that acts as a visual reminder. The production’s evocative set designs are by Jason Thompson. 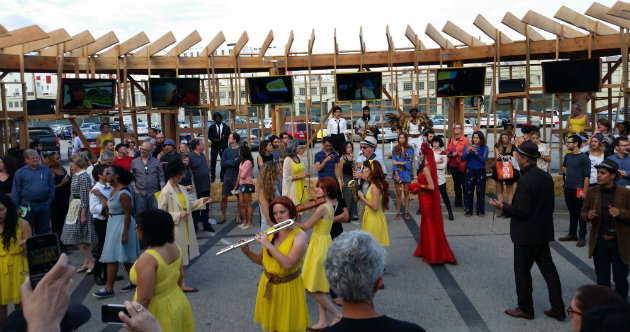 The effect becomes cinematic as the windows of the car frame the real world outside. Is that a character in the story or a chance encounter? Is that person on the motorcycle gliding alongside the limo part of the show? Yes! Ultimately, grasping the entire narrative is, by design, almost impossible, like trying to connect all the details of a dream.

“It’s a process of moving from complete discombobulation to clarity,” says composer Veronika Krausas. “You move from something convoluted and confusing to something more like a fragmented memory.”

The range of musical expression from the six composers is as varied as the landscapes— from cool minimalism, to rock and jazz. The majority of the scores are performed by live musicians. Other sections have been pre-recorded so they can be played back in the car to live vocal accompaniment. The pairing of composers and chapters, Krausas says, was a group decision. And because the chapters are not specifically related, the composers were allowed to use a wide variety of different instrumentation and musical styles.

“There were no preconceived boundaries regarding tonality, instrumentation, and style. It was pure, fortuitous synergy that gives the piece its melodic flow, not conscious design.”

It’s almost impossible to imagine the labyrinthine complexity of Hopscotch. Each route (which covers miles of the city) involves intricate timing, so as one chapter ends, the next can begin. No less than 24 limousines circumnavigate the three routes, gliding into place as one audience group (a maximum of 4 per car) gets out and the next group gets in. There are also fixed locations inside historic buildings, on rooftops, in parks and on the banks of Los Angeles River, which stands in for the River Styx.

Richard Wagner imagined opera as the total fusion of art forms. Were he to experience Hopscotch, Herr Wagner might be confused, but he would be smiling.