Benjamin Britten's monumental War Requiem will be heard Wednesday, April 22 at the UC Berkeley campus. The 200 voices of the University Chorus, Chamber Chorus, and Alumni Chorus will be joined by the Piedmont Children's Choir and a double orchestra, under the direction of Marika Kuzma, at 8 p.m. in Zellerbach Hall. Given that the large forces needed to perform this work are rarely available, this is an event not to be missed.

In the early 1960s, Britten set the War Requiem to traditional sacred texts along with the poetry of Wilfre 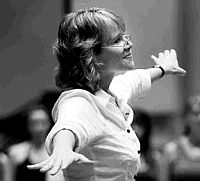 d Owen, who died in the trenches of World War I. It is disheartening to think how often the work has been a reflection on the times — looking back to the two World Wars and to the several wars since then, and seemingly finding no end to the use of war as the way to resolve disputes. The brutality, hypocrisy, and futility of war is described in many of Owen's poems. One of them, the powerful "Strange Meeting," is given voice by Britten at the end of his Requiem. In the words of Kuzma's announcement of the concert: "In the midst of the current economic crisis and continuing conflict in Iraq and Afghanistan, the choirs offer this concert to our community as an acknowledgement of our common humanity and overriding desire for peace."

The soloists are Janice Chandler Eteme, Christòpheren Nomura, and Brian Staufenbiel. Chandler Eteme has sung Mozart, Mahler, and Brahms with the Los Angeles, Philadelphia, and Cleveland orchestras, as well as specializing in spirituals and gospel music. Nomura, always welcome back to his native Bay Area, has performed with many distinguished orchestras, including a number of early music orchestras, such as the Philharmonia Baroque. His opera performances have included several Mozart roles, and he is the recipient of prestigious awards. Brian Staufenbiel, who has sung throughout the United States and Canada, is also an opera director. He is on the voice faculty of UC Santa Cruz.