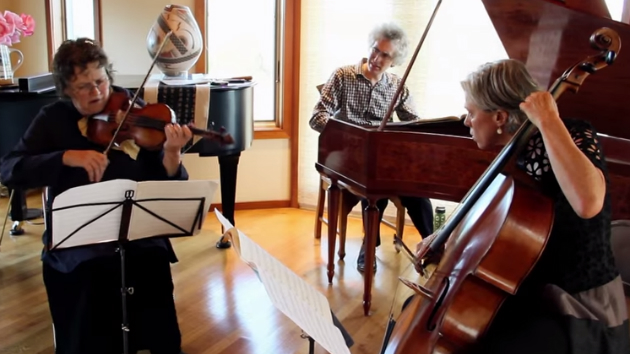 Last summer, on the gorgeous grounds of the Hanna Boys Center outside the town of Sonoma, cellist Tanya Tomkins and her musical and life partner, pianist Eric Zivian, presented a preview concert to plant the idea of what might be considered a rare varietal festival, with Romantic and Classical chamber music performed on period instruments. This July, the Valley of the Moon Music Festival will bear fruit in the form of six weekend concerts, featuring Tomkins, Zivian, a collection of other celebrated teachers of period performance, and the first-ever crop of apprentices in what will be an annual program.

Tomkins, co-principal cellist of the Philharmonia Baroque Orchestra and the Portland Baroque Orchestra, also performs with her fortepianist mate in the Zivian-Tomkins Duo, as well as in non-early music ensembles, such as the cutting-edge Left Coast Chamber Ensemble. Zivian has also performed with Left Coast, as well as the Philharmonia Baroque, Portland Baroque, the Santa Rosa Symphony, and San Francisco Symphony chamber concerts. His compositions, including an ASCAP Druckman commission, have been performed widely in the U.S. and Japan.

The couple spoke with SFCV from their home in Berkeley, also the site of Benvenue House Music, where they host performances by young chamber artists.

Has everything come to pass as you told us it would, last summer?

Tanya Tomkins: Miraculously, yes! Five amazing young musicians are coming to us from all over the country. We’ll have a Founders Circle private home kickoff on July 18 — that will be Mozart’s Clarinet Quintet — and the inaugural Festival concert will happen the next day, Sunday, at 4 pm, because that time is so beautiful there in Sonoma! Wine will be served on the terrace, and people can have dinner afterwards or drive back where they came from. Aside from the six ticketed concerts, there’s a free Apprentice Concert on Friday, July 31.

Eric Zivian: We’re calling this an Apprenticeship Program, and our apprentices will play three different pieces at that free concert. The five apprentices comprise a string quartet and a pianist. And we and the rest of the faculty are coaching them.

Did you have to select from among many applicants, this first time out?

TT: We did, and we had to say no to some very talented people, which was heart-breaking. But we wanted to start small in our inaugural season.  I think we went more for musically interesting people. We weren’t so much concerned with whether they were already really informed as Early Music instrumentalists.

EZ: We’re happy that we have two talented violinists, but from different sides: one has played mostly modern instruments but is interested in learning to play older ones, the other has played a lot of Baroque violin, but not a lot of Romantic or Classical music on it.

“I think the youngest apprentice is 22, the oldest close to 30. Part of our mission is to help them launch their careers and get exposed to the public, as well as to teach them about this style of performance, so that even if they go back to their steel strings and their modern bows or pianos, they can use all this stylistic interpretation.” — Tanya Tomkins

TT: I think the youngest apprentice is 22, the oldest close to 30. Part of our mission is to help them launch their careers and get exposed to the public, as well as to teach them about this style of performance, so that even if they go back to their steel strings and their modern bows or pianos, they can use all this stylistic interpretation.

Will they bring their own period instruments, or are you supplying them?

TT: A combination of both. I’m lending a classical bow to our cellist.

EZ: We’re not going to ask people to completely redo their instruments. Just [changes of] bows and strings will be good enough for the Festival. We’ll be bringing two different fortepianos up there, mostly to match the time when the pieces were written. One of them is a copy of a 1795 Dulcken, made in the 1980s by Paul Poletti and Janine Johnson. It sounds closer to a harpsichord — a little bit of the same action noise — and it will work perfectly for the Mozart and Beethoven. The other is an 1851 Rausch, from a Viennese builder working in the style of the famous Graf pianos, and one of the most beautiful originals I’ve played. Because we’re also playing Mendelssohn and Schumann, you need that bigger range, closer to a modern piano.

So the apprentices, aside from their own Friday, will be sitting in with their teachers, including the both of you.

TT: It sounds so different, and I think that appeals to them, something out-of-the-box. But I think they grew up with more familiarity with period instrument performance. There have been a lot of recordings of that, starting in the ‘80s.

What else has been the biggest draw to your apprentices?

TT: Who doesn’t want to go to Sonoma, California? It’s beautiful! But I think our roster of people coming in to teach was very impressive. To have Vera Beths, a violinist from Holland who is married to my Baroque cello teacher, Anner Bylsma, she’s a very well-known teacher. She’ll be playing the Schubert Cello Quintet with us, and there’ll be an apprentice violinist in the second violin position sitting next to her, and the apprentice cellist sitting next to me. Elizabeth Blumenstock [viola and violin] is a big star, everybody loves studying with her. There may be a Stradivarius coming from Europe with Vera, and Elizabeth has a Guarneri.  Monica Huggett is another Early Music star, she teaches at Juilliard, in the Historic Performance Department that a lot of these kids are very interested in. And then there’s Eric Hoeprich, who’s the world’s leading expert on historic clarinet, and violinist Ian Swensen, who teaches at the San Francisco Conservatory. He’ll be playing the “Trout” with us; that’s one of his specialties.

Readers can check out the Festival program at http://valleyofthemoonmusicfestival.org/, but is there anything else you’d like to say about it overall?

TT: We try to choose a variety that includes well-loved chestnuts, along with less familiar contemporaries like Hummel, who wrote this piano quintet with double-bass.

EZ: And the Glinka Clarinet Trio, which we’re playing with Eric Hoeprich, is extraordinarily beautiful, but not very well-known.

What else will the two of you be serving up before next year’s Festival?

TT: We’re hoping to do a recording in January of the Schumann Piano Quintet and his Pieces in Folk Style, and that will be with our Rausch piano and a group of wonderful musicians. And we’ve started a residence at the Green Center, presenting four concerts in the Fall and Winter, calling it Musicians From the Valley of the Moon Festival.