To the Valley of the Moon and Back With Tomkins-Zivian 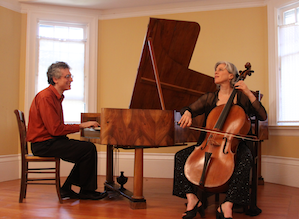 So far as cellist Tanya Tomkins and pianist Eric Zivian know, there's no other festival doing Romantic and Classical chamber music on period instruments. Certainly not in the United States. Maybe not in the world.

But there will be the Valley of the Moon Music Festival in Sonoma, California, devoted to this pristine purpose, and it’s being heralded with a performance by this talented and virtuosic couple this Sunday, at Sonoma’s Hanna Boys Center Auditorium, joined by two similarly inclined young instrumentalists.

When Tomkins, a teacher, ensemble member, and recording artist, first encountered the Baroque cello, with its gut strings and lighter bow, she heard “this huge sound palate of colors now available to me, to phrase, bring out important things, and blend with the piano.” And Zivian, her significant other, found the right kind of piano for this blend — actually, a fortepiano — sitting in the Music Sources Store, not far from their Benvenue Avenue home in Berkeley. “The registers are very distinct from each other,” he testifies about the keyboard instrument favored in the 18th Century, “and clarity between instruments is so much easier to adjust, so that you can really hear the contrapuntal lines.”

The couple has recorded as a duo and has hosted house concerts in Berkeley, but with their Sonoma-based festival they’ll be assembling an international faculty and a couple of handfuls of young, talented, ambitious students for a two-week period at the end of each July, for workshops, direct mentoring, rehearsals, and public concerts. This Saturday, the day before the concert previewing next year's Festival, donors will attend an invitation-only gathering. “People are so excited to have this kind of chamber music come into their community,” reports Tomkins, “and it’s a jewel of a place, which matches the tone of the festival we want to put together, high quality and intimate.”

On Sunday, Zivian will perform four-hand compositions by Haydn and Mozart on a Poletti and Johnson copy of a 1795 fortepiano, alongside Derek Tam, a pianist apprentice from the Benvenue House Concerts. Zivian and Tomkins will then be joined by the young Joseph Maile, on period gut-string violin, in Beethoven’s Piano Trio Op. 1, No. 1. The host couple will continue with a performance of Beethoven’s A Major Cello and Piano Sonata. Afterwards, “there’ll be wine on the patio, and we’ll be happy to talk to people and show them the period instruments and answer any questions — and make them feel included,” Tomkins promises.