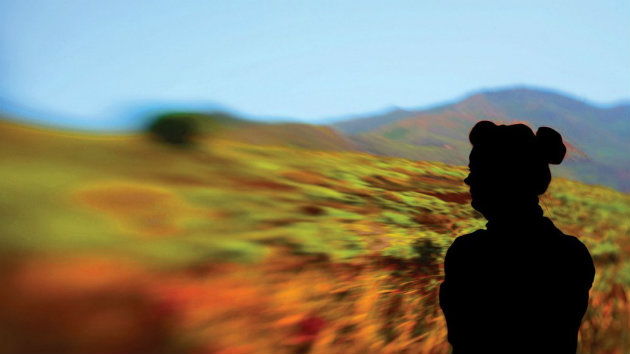 The spirit of adventure powers Lisa Mezzacappa’s musical expedition, Glorious Ravage, which enjoyed its Northern California premiere at the Brava Theater, in San Francisco’s Mission District, Oct. 1-2. Mezzacappa, in collaboration with four local filmmakers and a virtuosic ensemble of Californian musicians — and an entrancing vocalist from New York — sourced and magically reimagined the legacy of a handful of women explorers from a century-and-more ago, leading the appreciative audience into its own thoroughly modern series of discoveries.

Like her historical inspirations, Mezzacappa multitasked, serving as conductor and one of two bassists (along with Mark Dresser), as well as composer and narrator. Compositionally, she displayed an artful grounding in jazz rhythms and voicings, but her musical approach, again like the lady adventurers, had little need for genre boundaries, instead prioritizing the evocation of places and people and the examination of collaborative sonic possibility.

So there was a uniformity of dynamic energy, if not of style, across the 10 titled sections and four interludes into which the piece is divided, each of these also accompanied by large-screen videos by the four participating visual artists. Some cinematic ideas — for example, Konrad Steiner’s film of surf lapping over shoes — which accompanied the opening section, “Veta” — reappeared later. The blithe musical element of the opener evoked, intentionally or not, flugelhornist Chuck Mangione’s 1973 hit, “The Land of Make Believe.”

For “Make No Plans” — the title taken from explorer Isabella Bird’s 1872 letter from Hawaii — male instrumentalists formed a vocal chorus. Videographer Alfonso Alvarez presented polychromatized images of an antique sailing vessel and acid-washed images of an old bicycle, homaging Annie Londonderry’s two-wheeled trip around the world in 1895. Later in this section, vocalist Fay Victor (from New York) rivaled the globe-girding tessitura of Yma Sumac, and Mezzacappa fabricated a sonic bomb evocative of the late bassist-composer Charles Mingus. Compositionally, [Mezzacappa] displayed an artful grounding in jazz rhythms and voicings, but her musical approach, again like the lady adventurers, had little need for genre boundaries.

In both “Heat and Hurry” and “Marianne,” Mezzacappa’s debt to jazz visionary Ornette Coleman was apparent, specifically to his horn-like deployment of vocalist Asha Puthli on the 1972 album Science Fiction. Vocalist Victor here showcased her instrument as elastic, warmly rounded, and polished, though a little light at the lower end. The instrumental arrangement on “Heat and Hurry” also followed the inspiration of Coleman’s “free jazz,” with wondrous exchanges between horns and woodwinds. The jazz matched Kathleen Quillian’s visual depiction of a psychedelic romp in the tropics, further suggested by angular, unpredictable melody lines with occasional Latin flavors.

On “Taxonomical,” Mezzacappa showed more of her expansive power of narrative, backing images of handwritten and typed notes of explorer Louise Arner Boyd with an almost scientific give-and-take between the electronic effects of Tim Perkis and the steely vibraphone of Kjell Nordeson, sometimes evoking the chilling modes of Eastern and Northern Europe. Aside from the notes, videographer Janis Crystal Lipzin positioned trippy bifocal suggestions of what Boyd might have been observing.

Antique travel photos were gathered by Quillian for “Marianne,” accompanied by joyous jazz in rather Levantine modes, alluring in an almost childlike manner. Winds and horns were encouraged by Mezzacappa, here and elsewhere, to play air sounds through their instruments without mouthpieces in place. To this listener’s ear, this alteration of instruments somehow served to universalize them, in some cases to invoke their ancient roots.

Mezzacappa, on “Shut Out the Sun,” confirmed that she is as much an aural artist as a composer, her bass working handsomely in tandem with Dresser’s. Lipzin here depicted floes of ice and images of one of the young, attractive explorers. Victor’s lovely vocal line soared above the spirit-raising foundation of the instrumentalists, whose extended approach also included overbowing on the strings, the borrowing of a bow by the vibraphonist, and the application of a steel wool pad on the strings of the guitar.

The title of the concluding “City of Wonders” was applied satisfyingly to San Francisco, in 1855 by European visitor Ida Pfeiffer. An odd but engaging soundscape was built by Mezzcappa for her odd but engaging second home (she came out from New York in 2001 to explore the city’s potential and decided to embrace it). Some folksy effects were included in the section, with Dina Maccabee’s violin acting like a fiddle, a swinging electric guitar foray by Finkbeiner, and a possible quote from Tony Bennett’s hymn to the city, all with Alvarez’s images of the moving pen and the moving wheels of a bike. The audience moved out into the Mission District night, very entertained and brilliantly illuminated.