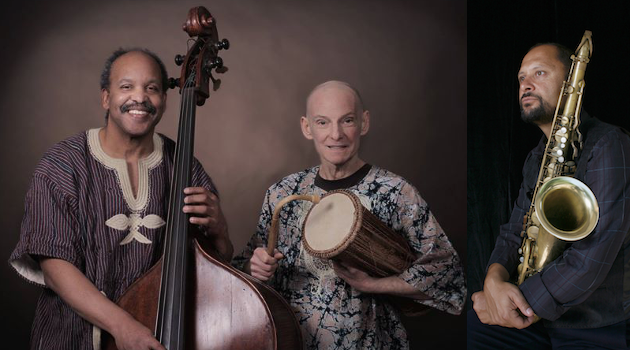 The concert began with a solo drum introduction, the skins and cymbals attacked directly with bare hands to convey an intimate, evocative feel. I am generally skeptical of drummers who lose their sticks, but hartigan made me an instant convert with his deliberate and effective touch. A longtime student of musical traditions from all over the world, hartigan incorporates traditional rhythmic and melodic devices into his own frameworks for composition and improvisation, resulting in an idiom that could be categorized as jazz, and that in a way mirrors the kind of transcultural communication that led to the formulation of our great American musical genre.

Once the band kicked in for the rest of hartigan’s Wadsworth Falls, the performance unfolded along expected patterns — a head or theme would be stated, and solos taken in turns. There was, however, a vitality and freshness to the idiom that made each number captivating. Modirzadeh contributed two of his own compositions in the first half, each drawing from different influences: the driving Centrifunkal Force took Indian rhythmic solfège as its point of departure, and a slowed-down version of the harmonic progression for Coltrane’s “Giant Steps” as its arrival.

By contrast, İlerici was inspired by a period of study in Turkey, where Modirzadeh explored ways to bring the microtonal maqam system into the equal-tempered realm of the Western piano. The composition is named after Kemal İlerici, a music theorist who played a key role in the standardization of Turkish musical practice as part of the country's nationalist movement after the dissolution of the Ottoman Empire. 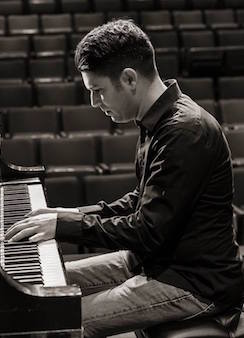 Another piece by hartigan, named Ewe after the Ghanaian Volta people whose rhythmic practices it borrowed, rounded out the first half. As explained by the composer in a short spoken introduction, the piece used a different traditional dance rhythm to accompany each instrumental solo section, allowing Brown (who also played a mean African flute), Modirzadeh, and Behroozi to display their technical and musical prowess in a variety of rhythmic contexts.

After a brief intermission the quartet returned with a shorter set consisting of more immediately familiar material — each selection a take on easily identifiable standards such as Kern’s “All the Things You Are,” Coltrane’s “Naima,” and Tizol/Ellington’s “Caravan.” Each, however, was given the hartigan treatment in the guise of complex, often bewildering rhythmic structures. Throughout the evening, hartigan showcased his instrumental command of both drum kit and assorted percussion tossing off both timbral variety and polyrhythmic complexity. He also displayed his communicative penchant as a bandleader, coaxing seamless and riveting performances from his collaborators. Most importantly, he offered a touching reminder of the proper way for a musician to approach culturally sensitive material — not as sources to be plundered, or as mere evocations of the exotic, but rather as vibrant, living traditions to be treated with reverence, respect, and humanity.