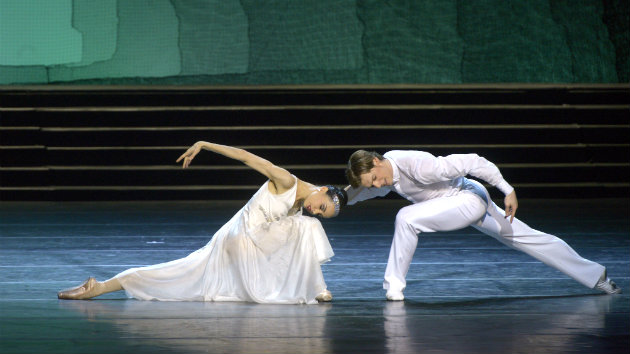 The Mariinsky Ballet’s Cinderella, which premiered 13 years ago – when its choreographer, Alexei Ratmansky, was just getting started as a big-time dancemaker – is a mixed bag, not unlike the one Cinderella’s bag-lady fairy godmother carries around on the stage. You might get an orange, or you might get a glass slipper. Such is the randomness of life, or of ballet – at least this particular Cinderella, which throws in all sorts of moves and moods, characters, and costumes. The audience on Oct. 1 at Zellerbach Hall — where Cinderella, kicking off the Cal Performances dance season, played through Sunday afternoon — loved it.

No reason, really, not to. The dancing was sublime, led in the title role on opening night by Diana Vishneva, she of the long arms and legs, the melting extensions and thrilling spins, the charming, wide-eyed evocation of joy or sorrow, the inborn musicality. Anastasia Petushkova, as the orange-haired Stepmother, is all ferocious attack, with black toe shoes pointing into knifelike kicks a la Rosa Klebb of the Bond flick From Russia With Love and terrific comic timing.

There are many versions of Cinderella, which composer Prokofiev completed in 1944. This one takes place, we’re told, in the Depression in Russia. It’s the 1930s, and life around Cinderella’s house is, we suppose, hard. Their anonymous apartment is framed by harsh metal scaffolding, which Cinderella, in shlumpy rags, is polishing as the curtain rises. Still, she’s a dancing master and a hairdresser minister to the stepsisters and their mother, readying them for the prince’s ball. It’s just one of many inconsistencies. Ratmansky, incidentally, has lavished wonderful moves on the Steps – Anastasia Petushkova, as the orange-haired Stepmother, is all ferocious attack, with black toe shoes pointing into knifelike kicks a la Rosa Klebb of the Bond flick From Russia With Love and terrific comic timing. Khudisha (Margarita Frolova), the heavier stepsister, has a pink wig and is broadly aggressive, while little Kubishka (Yekaterina Ivannikova), in a silly blue wig, is a mite sneakier.  Our heroine separates the scrum when their hand-to-hand combat peaks.

Things get less conventional when the fairy godmother, listed as the Fairy Tramp (Elena Bazhenova), arrives and sends Cinderella to the ball not in a pumpkin coach, not with horses, but with four buff, strange-looking guys in punk hairdos and tights of red, blue, green, and orange. They’re called the Four Seasons, and though some writer has suggested that they denote the passing of time, all they really stand for is a chance to watch some sharp and engaging male ensemble and solo work. No, the passing of time is a gigantic clock that becomes a brutalist chandelier in the ballroom. It has no hands, so Cinderella periodically asks the gents to check their watches for her – a new one for Cinderella, and the Fairy Tramp tromps by too, swinging a pocket watch and winking at the audience. Delightful. 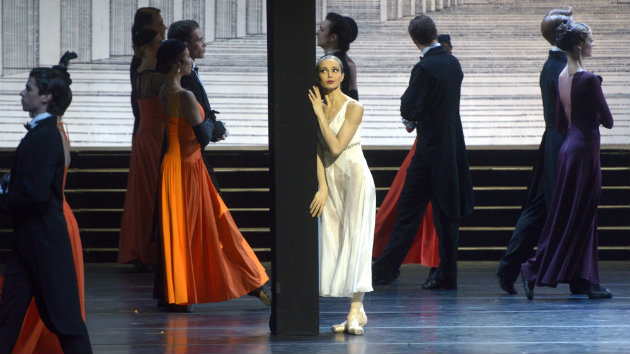 Were there balls in the Soviet Depression? Evidently. This one takes place in a quite wonderful but severe black-and-white setting suggesting pen and ink art deco. The dancers are fancy, in Elena Markovskaya’s marvelous costumes. The men wear black tuxes and white gloves, and the women wear silky, slinky gowns in pinks, peaches, and reds; little black cocktail hats; and black point shoes.  There are salutes to popular dances of the time, like the Suzy Q, and wonderful syncopated stomps and trots and flicks of the wrist, and, during the waltzing, a proper evocation of Russia’s imperial ballet, with bending backs and supple lifts. The stage is filled with motion, with unison, with energy, and as with more recent Ratmansky ballets, the audience is swirled into the scene. In the pit, the Mariinsky Ballet Orchestra, impeccably conducted Thursday by Gavriel Heine, made the score sound bright and new.

The Prince (Konstantin Zverev) is all in white. He’s a hammy, tall, hot number. He almost preens (but not quite, thus his charm) as he pirouettes and poses, dusting off his immaculate shirt front.  He consumes the stage with grand jetes, managing, barely, to avoid a large pillar.

Anyway, we know he’s the prince, even with his dinner jacket off, and so does Cinderella. Her stepfamily literally launches itself at the prince, but their moves are in vain. When he encounters Cinderella, it’s love at first sight, and their first pas de deux, as everyone fades from the stage, is enchantment itself.

Cinderella’s dress, by the bye, is a white, silky number, its bodice splashed with diamonds, and every move, every lift, displays her beauty, the lines of her body enhanced by her gown.

The pas de deux has no solo variations. Hers will come later, as members of the court urge Cinderella into a shy and entertainingly awkward, then a rapturous dance.

The prince searches the kingdom, including boisterous temptations of both sexes, for his lady, who, true to form, dropped a glass slipper as she fled the ball at midnight. He finds her, dozing in her flat. She’s up on the scaffolding, and when she drops the mate to the slipper that the Steps have been trying to squish their feet into, they reunite. They dance passionately, and they end up curled together on the forest floor, surrounded by misty outlines of cypress trees. He’s holding her closely, tenderly; she is wearing a teary smile.

Why, all of a sudden, is Cinderella melancholy? As they danced in the forest, you could tell she’s sad. She’s not rejecting him, but his ardor is wholehearted and hers appears to be undercut by pain. Is it because her father asked her for money as they were running off to the woods? Or is it, as Greta Garbo said in the movie Ninotchka, “We Russians are only sad when we are happy. And right now I am so very, very happy.”

Your replies are invited.