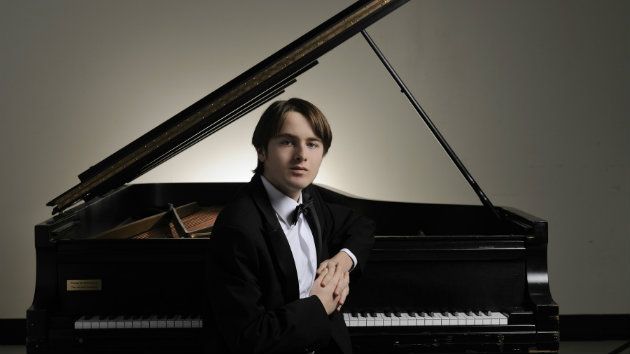 Refreshed from the summer break and inspired by an exhilarating European tour, the San Francisco Symphony and Michael Tilson Thomas opened their new concert season on September 25 at Davies’ Symphony Hall with a wonderful blend of brilliant and virtuosic playing, crowd-pleasing and spectacular repertoire, and lots of ear candy.

Much of that can be scored up to the soloist alone, Russian concert pianist Daniil Trifonov. His delivery of Chopin’s Piano Concerto No. 2 in F Minor, Opus 21 was absolutely astonishing, but the intensity and energy of his performance were certainly matched throughout the evening by MTT and his musicians — including a number of hired hands, given the orchestral forces required for Ottorino Respighi’s Feste Romane (Roman Festivals).

Trifonov worked his magic right before intermission. As a pianist, he has the nimblest touch in the business, even when the music is more ferocious. His delicate playing has an otherworldly quality of lightness and transparency. Trifonov’s fingers float across the keyboard as if he doesn’t even touch the keys; he just breathes and whispers into his piano and the instrument responds with pure tone, the notes emanating in sparkling garlands from his hands.

The pianist responded to the loud and lengthy cheers from the audience with an encore in the form of an Étude by Franz Liszt, in which — unfortunately and oddly — he was less precise and expressive than in the Chopin concerto.

MTT and the S.F. Symphony opened the concert with a six-minute piece of orchestral sweetness, Maurice Ravel’s Menuet Antique — the composer’s first published work (1895), originally for solo piano. The symphonic version, here in its first-ever performance by the S.F. Symphony, is Ravel’s own instrumentation from 1929, in which the mature composer enlarges every emotion of the piano original tenfold, including the sheer beauty and grace of the melodic material and the pastoral nature of the middle section.

Ravel’s sweetness was complemented after intermission with some more musical confectionery: Rossini’s overture to his operatic farce La Scala di Seta (The Silken Ladder). Even though his operas have not all stood the test of time, I am not aware of any of his overtures that is not a huge success on a concert program, and this outstanding performance of the Silken Ladder was no exception. [Rossini's overture to La Scala di Seta] was the perfect vehicle to let every section of the S.F. Symphony have a little moment in the sun: the elegant and creamy strings, the velvety woodwinds, the luscious horns.

It was also the perfect vehicle to let every section of the S.F. Symphony have a little moment in the sun: the elegant and creamy strings, the velvety woodwinds, the luscious horns.

Almost all the usual orchestral instruments that Rossini did not need/use in his composition, such as trumpets, lower brass and percussion, were included in Respighi’s Feste Romane — and then some: including the timpanist, the percussion section alone was 10 musicians strong. Also included were: high clarinet in D, bass clarinet, contrabassoon, piano four hands, and organ, to name a few. And for good measure, the composer answered to his Italian heritage by including a lovely mandolin.

Respighi uses this monumental apparatus to great effect, but his creation of highly original musical imagery and his sense of painting atmosphere do not depend on large orchestral gestures alone. On the contrary, as the second movement, “Giubileo” (“The Jubilee”) made abundantly clear.

With these resounding “Roman Festivals,” MTT and the S.F. Symphony made me happy and thankful that the summer is over and that a new concert season is upon us. There is a lot to look forward to.

Lastly: the S.F. Symphony program notes now include a nifty and very convenient new feature: an ‘At a Glance’ page on which every piece on the program is described in only a few paragraphs; just the summary or refresher one needs — and it prevents a lot of page turning.