The music of this CD/DVD is easier on the ear than the concept is easy on the mind. But that doesn’t obviate the importance of, and the potential pleasure in, embracing the full intent of the creator, Sufjan Stevens. East Coasters may recognize in the title the source of inspiration: It’s the unsightly and often dysfunctional but vital Brooklyn Queens Expressway, which traverses a couple of New York City’s boroughs, one of them the site of the institution that commissioned and premiered this project, the Brooklyn Academy of Music. 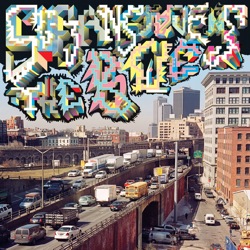 With no advertising, Stevens managed to pack the Academy’s Opera House in November of 2007, where he screened a visionary film shot by himself and Reuben Kleiner, accompanied by a 36-piece orchestra. The new release, on Stevens’ Asthmatic Kitty label, comprises a DVD of the film and a separate recording of its soundtrack. You don’t need the movie to enjoy the soundtrack, but their relationship is both artful and entertaining.

The music is divided into 13 segments of various lengths, some linked without break to the next, some distinctly unique. The initial Prelude on the Esplanade, for example, is a sustained burbling drone accompanying a long, panoramic shot of the BQE from what I assume to be the East River. The following Fanfare introduces an ambiguous, but fascinating, subtheme of the film in the form of three women in form-fitting action hero outfits wielding hula hoops — the so-called Hooper Heroes.

Listen to THE BQE.

Philip Glass’ score for Godfrey Reggio’s 1975 film Koyaanisqatsi is evoked in the Prelude, while the Fanfare brandishes horns and woodwinds as bright and forthright as Copland’s. The editing of the movie follows the structure of the music, and the musicality of the images is effectively enhanced by the intermittent use of fast- and slow-motion techniques, and by a triptych presentation. The three panels variously depict three independent images, three sections of the same elongated objective (like a bridge or the trio of Hooper Heroes), or mirrored images (like nighttime traffic) that generate a kaleidoscopic effect.

Aside from an interesting bit of electronica, Stevens ably showcases his reeds, horns, strings, percussion, and piano with articulation far beyond minimalist processes and in a cornucopia of styles, including concerto, symphonic dynamism, elegy with motif, and jazz riffing. It’s all skillfully performed and as varied and compelling, in tempo and in meter, as are the scenes of architecture old and new, hula hoop routines, and, of course, traffic patterns. This is a kinetic and stimulating ride, and it mostly works wonderfully — which is more than can be said for the Expressway.