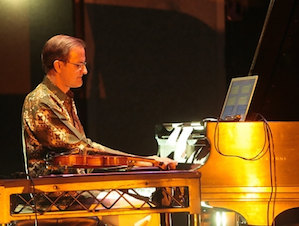 In Tom Stoppard’s 1993 play, Arcadia, a precocious young girl (Thomasina Coverly) is convinced that if she can just do the math, she can unravel the golden formula that will explain everything. The problem is she’s living in a secluded country house in England in 1809 and the technology available is not up to the task.

A year after the premiere of Arcadia composer David Rosenboom found himself facing a similar conundrum. He was deeply immersed in the creation of Zones of Influence a five-movement piece he describes as: A propositional cosmology activated in music for percussion and algorithmic instruments with auxiliary keyboard and glissando parts. Rosenboom’s problem, (much like Thomasina’s) was the technology at hand. The level of computer generated electronic sampling etc. was not yet up to the dimensions of his cosmological vision.

Zones of Influence was written for percussionist William Winant, and the movements, beginning in 1984, were premiered in succession as they were completed. The entire composition was subsequently recorded and performed in many concerts in the U.S. and Canada.

As Rosenboom explains, “the electronic parts were realized with the Touché, a digital keyboard instrument that was developed by Donald Buchla (and myself) in 1979.”

Flash-forward to Nov. 1, 2014 at the Cal Arts REDCAT theater in Downtown Los Angeles, where Rosenboom and percussionist William Winant performed a technologically updated version of Zones of Influence.

This new version, according to Roseboom, “finally realizes all aspects of the propositional musical model I envisioned in the mid 1980s. Music technologist Martijn Zwartjes collaborated with me to create a new synthesis instrument, which we call the Touché II.”

Born in 1947, Rosenboom, has been dean of the School of Music at Cal Arts since 1990 following in the footsteps of Mel Powell and founding director, John Cage. And since the REDCAT now serves as Cal Arts’ downtown performance venue, it was the perfect place to relaunch Zones of Influence. Rosenboom’s program notes for the 90-minute composition are slightly less dense than a black hole, defining the piece’s five movements in terms of morphological transitions, the illusion of the continuum, attracting trajectories, real pregeometry, epigenesis, ontogenesis, phylogenesis, and parthenogenesis.

Zones of Influence is a propositional cosmology activated in music,” he writes. “It is an example of propositional music, a point of view about composing in which the composers might build proposed models of worlds, universes, evolution, brains, consciousness, or whole domains of thought and life and then proceed to make dynamical musical embodiments of these models, inviting us to experience them in spontaneously emerging sonic forms.” And that’s not even the end of the first paragraph.

Personally I cannot dissect rhythmic patterns to the third power. But I was consistently aware that such intricacies were there as Rosenboom performed live (on piano and violin), in addition to setting in motion his complex matrix of computer-generated programs that interfaced with Winant’s prodigious performance at five corresponding stations of percussion instruments. These five installations progressed from a battery of three tuned snare drums; to the dulcet tones of the marimba; to the metallic ring of xylophone and gongs; to tablas; to the harsh clang of steel disks and cowbells.

Part III (at least to me) serves as the swirling vortex of Rosenboom’s musical universe.” It is a wild ride with Rosenboom producing rapid pulses at the piano as Winant strikes the clarion bright notes of the xylophone and a hanging array of gongs and metal sheets of various sizes. Rosenboom describes the movement as, “a process through which the universe may learn to perceive its own existence.”

I can’t say I was transported by Zones of Influence. But I did find myself totally immersed and fascinated by the intricacies of the interactions, and Winant’s super-human ability to produce the most intricate rhythmic patterns.

It was in the last two sections, which featured Rosenboom playing a heavily amplified violin that I began to wish I could call on Scotty to “beam me up.”

In Part IV the violin part is based on a series of long wailing slides (glissando seems to kind a word) that really do sound like a cat with its tail caught in a wringer. It was loud and abrasive and genuinely unpleasant.

In Part V the rapid single notes and figures on the violin replace the slides accented by the harsh bang of the cowbells. By this point I was no longer on board.

It should be mentioned that as an added component, the performance was framed by a series of video projections by Jinku Kim that ebbed and flowed in the background creating there own set of visually rhythmic patterns.