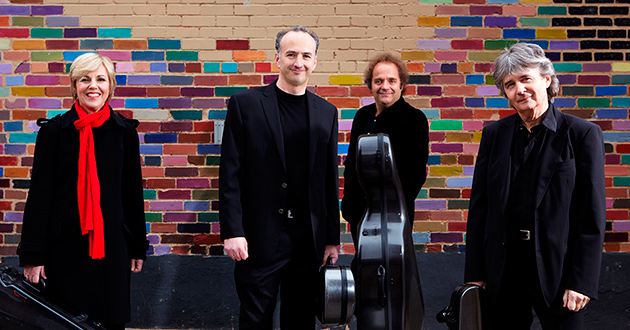 For a group widely considered to be one of the best string quartets in the world, I was pleasantly surprised by the Takács Quartetʼs humble sound. By that, I mean that in the afternoon’s program of Beethoven’s Op. 130 Quartet in B-Flat and Mozart’s G Minor Viola Quintet, the group played together without individual ego. Their sound was soft and delicate — with each member of the ensemble concerned completely with blending to make something larger, instead of being heard individually.

Even while playing at Cal Performances’ enormous (for chamber music) Zellerbach Hall, they kept their volume at an intimate level that would have been perfectly lovely in a cozy living room. From the eighth row I could hear them just fine, but friends seated in the balcony reported having trouble hearing the inner voices. Some of the quartet’s delicate softness was lost in the big space.

The trend among quartets these days leans toward musical democracy with all the voices being equal. But the fact of the matter is that, especially in Beethoven and Mozart, it’s more like an “enlightened monarchy,” with many of the movements practically like concertos or virtuosic etudes for the first violin.

The second movement Presto, in the Beethoven, had titillating dynamic energy. From the stage-whispered opening argument to the scratchy, three-note fortissimo surprise, it was the essence of Beethoven — dramatic, angry, fun.

The Takács seems to embrace this reality, with the lower three voices (violinist Károly Schranz, violist Geraldine Walther, cellist András Fejér) yielding sound and ego space for first violinist Edward Dusinberre, who embraces the role without letting it get to his head.

Dusinberre was dressed in a black shirt, tucked out for freer upper-body movement. (The practice of making classical musicians wear constraining tux jackets and suffocating bow ties is way past due for abolition.) He played with amazing facility and virtuosity that didn’t come off as showy. Though he has a habit of dramatically swooping his bow outward to finish phrases, there is a good technical reason for this — it allows for a gentle taper without losing momentum.

The second movement Presto, in the Beethoven, had titillating dynamic energy. From the stage-whispered opening argument to the scratchy, three-note fortissimo surprise, it was the essence of Beethoven — dramatic, angry, fun. In the infamous cavatina movement the four musicians huddled together, leaning closer to each other’s space to hear every minute nuance of timing and intonation. The B-Flat quartet has two alternate endings: the enormous, metaphysically challenging Grosse Fugue or a more pleasant and lightweight yet still heavily contrapuntal Allegro. The Takács opted for the latter this Sunday afternoon.

In the viola quintet, Walther played the viola solos with loads of vibrato, for a rich but undulating tone that blended well with the quartet’s overall dark and subdued sound.

In the first movement there are measures where everybody plays something different. The first violin has runs of sixteenth notes. The second violin and first viola play staggered iterations of the theme. The second viola plays long singing notes and the cello plays joyous arpeggios in a skipping rhythm. Thanks to the Takács’ transparent and yielding ensemble philosophy, all of these elements were clearly heard.

I remember having played this piece ten years ago while studying at the San Francisco Conservatory of Music. Mark Sokol, who passed away last week, was coaching us. He spent almost the entire lesson on a few phrases at the end of the first movement. Mozart stretches the intervals on the low end, pulling the pickup note downward until it reaches the low G string. I recall Sokol saying that this low G was his favorite note in all of chamber music. I was listening for the note, and indeed when it came, Dusinberre gave it an extra-growly tug with his bow, sending shivers down my spine.

Guest violist Erika Eckert was a natural fit with the Takács, blending into the hushed ensemble by leaning over to support Walther’s sound for most of the piece, and coming out for those nasty C-string grumbles in the slow movement.

String instruments weren't designed to be very loud. They were intended for small indoor venues, and they sound best when the bow warmly massages the string. It was comforting to hear the Takács play in such a fashion while simultaneously achieving such a delicious, cohesive sound.