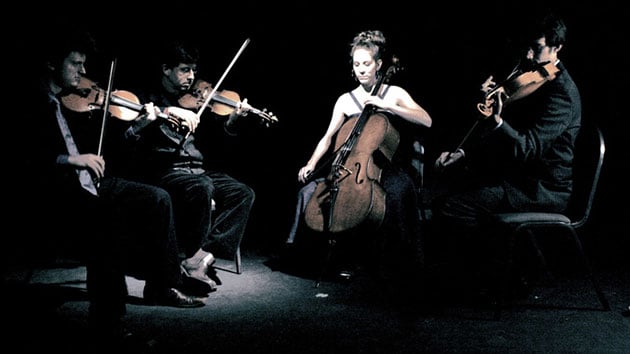 I’ve been thinking a lot about snow lately. It’s hard not to, these days. Ever since my final semester at Oberlin started, the campus has been buried in the stuff. The wind just begins to blow the trees bare or the temperature pushes just high enough for the snow to start melting, but then the clouds gather again and yet another new blanket falls.

From the outside, the music the ensemble performs might all look similar – a white haze of loud pops and jarring rasps with the occasional smirk of tonality thrown in for good measure. Once you take a walk through it, or dip your fingers in ungloved, or throw yourself in backwards with your arms spread out, then you will begin to see how many textures it has to offer. No microscope needed.

Most of the playing time was dedicated to two pieces composed by members of the Los Angeles-based ensemble: Mark Menzies’ Only and Andrew Tholl’s hope and optimism never got me anywhere. Menzies’ piece, based on a Morton Feldman song, was meditative and meandering, many times seeming to find purchase before liquidly slipping into another phase of a dream. The four musicians guided us through a landscape of iridescent chords and chant-like unison melodies, always locked in with each other, even when the texture of the music called for an untethered glow.

One instant the quartet was taking the sound and running it into the wall, pushing their instruments as high as they could go, and the next the violins and viola had the pitch trembling in the air over the cello droning on its lowest note. The piece finally ended up with Menzies and Tholl’s lines circling around each other, again and again on the same note for an instant till one bent the pitch ever so slightly, just enough to raise the hair.

The quartet also performed two shorter pieces by Christian Wolff. Summer was sparse and harsh – a quick sequence of figures separated by sometimes exaggeratedly long silences. For E.C., dedicated to Elliott Carter, hovered a few inches above the ground, brooding all the way through.

Kristian Ireland’s Clearing I began with an icy roar, a wailing violin whiteout from Menzies, with shadows of viola and cello appearing and then receding. The lashing barrage was so intense that it was almost unbelievable that McIntosh had put down his violin to conduct, but then added yet another layer of crunch to the middle when he did finally jump into the mix a few minutes in.

Having begun in the upper reaches of the highest instrument, the sound subtly slid down from the rafters to finish with the solo cello creaking low, throwing some salt on the road.