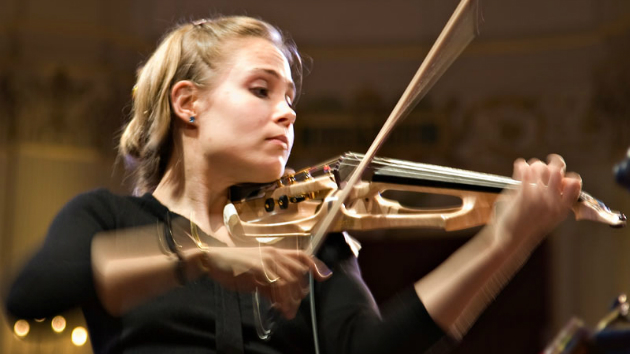 Toward the end of the penultimate movement of the New York Philharmonic’s world premiere performance of John Adams’ Scheherazade.2 at Lincoln Center, violinist Leila Josefowicz stood silent at the front of the stage. She bent slightly forward, clutching her instrument by her side. The strings rustled menacingly, encroaching and retreating again with conductor Alan Gilbert’s gestures, before the full force of the orchestra blasted her and all of Avery Fisher Hall with a condemning, sneering chord. Josefowicz slowly tilted her head back, eyes closed, as blows of horns, percussion, and cimbalom rained down. When she did raise her violin to play again, her notes were muted, gagged but refusing to be silent.

The new “dramatic symphony for violin and orchestra” took up the entire second half of the March 26 concert. It was a perturbing journey, and the two concretely imagistic Russian pieces of the first half proved ideal travel companions.

Stravinsky’s Petrushka was performed in its original 1911 version, intended for stage instead of concert hall. Gilbert was a dynamic showman, definitively in control while letting the musicians command attention. Eric Huebner’s piano accents had just enough music-hall sleaze in them to conjure up images of the jerky marionette characters, and trumpeter Matthew Muckey’s piercing and foreboding fanfares sliced the air. Puppets there may be, but a kiddie show this isn’t. Anatoly Lyadov’s serene The Enchanted Lake, the first piece, served as a sweet appetizer before the two flavors of conflict to come.

Before Scheherazade.2 began, Adams explained onstage that the piece has less to do with the storytelling queen of The Arabian Nights than it does with the suffering of women at men’s hands in modern day Tahrir Square, Kabul, and our own backyards. (The composer’s barb at Rush Limbaugh prompted applause.) Its four movements introduce the heroine and the sinister “True Believers”; show her with a lover; put her on trial, where she is condemned her to death; and illustrate her escape to sanctuary.

Adams’ notes and visions for the piece had an uncomfortable whiff of clickbait about them. His sparse, minimal images of oppression manifested in the “Men with Beards,” who title the third movement —  as if a beard grown for religious observance automatically equates to fanaticism.

I cringed at his repeated hint that Scheherazade’s lover in the second movement was “maybe also a woman … who knows?” That attempt at inclusivity felt tokenizing and exotifying. That anecdote could have easily been omitted, and I hope it is in the future.

Josefowicz’s Scheherazade was not content, even in the second movement’s tender but anxious love scene or in the embrace of the soothing string sighs of the finale, when she flees to safety. Her surroundings told her to relax and fall into the safe arms of tonality, but the solo violin ended in an unresolved, interrupted thought, fading out dissonant. It was as if she knew how many more Scheherazades were still trapped, and that many don’t escape.