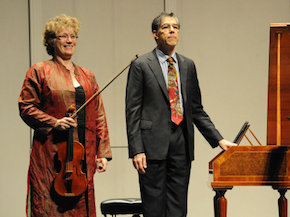 The Ira F. Brilliant Center for Beethoven Studies, in collaboration with the American Beethoven Society, is currently presenting a cycle of all 10 of Beethoven’s sonatas for violin and piano — a rare enough treat — on period instruments — a rarer one. On Saturday I attended the first of three concerts, featuring four of the earlier sonatas. It was both educational and a lot of fun.

This is chamber music, so, for the sake of acoustics as well as authenticity, it was played in a chamber. The Beethoven Center is a research library and small museum tucked into a corner of the King Library on the campus of San Jose State University. Sixty chairs filled an adjoining classroom, its folding wall open to the display area of the Center, with three period fortepianos in a row, all belonging to the Center, receding into the distance.

Pianist David Breitman sat at the first of these, with violinist Elizabeth Wallfisch by his side. The sounds they produced would be quite startling to a listener who knew only modern-instrument performances. The gut strings of Wallfisch’s violin each had a distinctive tone, none of them sounding like modern nylon or steel, from a soft, mellow G string to an intense, piercing E — a range Wallfisch cannily exploited in her choice of fingering. Playing to a low concert pitch of 430 kept the strings from a tight strain, which meant that intonation was not much of a problem, although frequent retuning between movements was necessary.

Breitman’s fortepiano was a replica of a circa 1795 Viennese model. The white keys were black and the black keys were white, because that hadn’t yet been standardized then. The sound of the instrument differed even more from the plush tones of a modern piano than the violin did from its modern equivalent: light, rattling, even tinkling in the higher range, with a strong initial attack; although it wasn’t a harpsichord it bore the echo of the crisp sound of one.

The artistic effect of this was to keep the more genial works on the program, such as the “Spring” Sonata (No. 5 in F, Op. 24), from sounding overblown. On more powerful modern instruments, the “Spring” Sonata can display an excess of Beethovenian gruffness. The result of avoiding that is that the one minor-mode work on the program, the Sonata No. 7 in C Minor, Op. 30, No. 2, stood out strongly for its distinctly darker tone. It was a small revelation enabled by the attempt at earlier performing practice.

From the beginning, Beethoven is out to make the instruments equal partners, with increasing sophistication as he goes along. Even No. 1 is charming, with little figurations and double stops in the slow movement variations, and a finale which came out quite lively. So did the other finales, particularly that of No. 8, full of Beethoven’s almost goofy evocation of galumphing folk dance music, humorously conveyed.

Wallfisch and Breitman were consistently lyrical in melody ... and they always kept the structure and form of each movement entirely clear and straightforward.

The juxtaposition of multiple sonatas allowed listeners to trace other repeating features, particularly in the dialogue between violin and piano. Offset notes between them in the scherzo of the “Spring” Sonata (the other genuinely amusing movement of the concert) seem to be the seed of the darker trading off of fortissimo chords in the opening movement of No. 7, and possibly the violin’s chirping responses to piano chords in the first movement of No. 8. Pizzicato passages and double stops, the latter reaching their height in a ringing passage for two violin strings playing the same note in the scherzo of No. 7, also seem to have grown in Beethoven’s mind.

A critical review of Op. 12, Beethoven’s first set of sonatas, at the time of its publication criticized the composer for being too oppressively learned and not tuneful enough. Such an opinion couldn’t survive this performance. Wallfisch and Breitman were consistently lyrical in melody, fairly fast in most of the slow movements and decidedly chipper in the finales, and they always kept the structure and form of each movement entirely clear and straightforward.

The second concert was Sunday afternoon, and the series concludes on Thursday at 7 p.m. with the early Sonata No. 2, the tense and jumpy Sonata No. 4, and the gentle late outlier of the set, Sonata No. 10 from 1812. Judging by the first concert, this too should be a joy to hear.