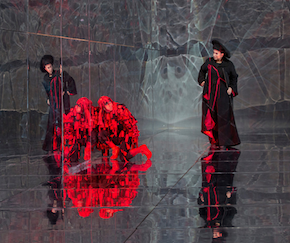 Of all Richard Strauss’ operas, Die Frau ohne Schatten (The Woman Without a Shadow) is surely the most far out. Not musically but dramatically, in the “symbolic-morality” reach of Hugo von Hofmannsthal’s libretto. That fantasy aspect in the Metropolitan Opera’s current production is rendered in a double stage setting — one full-stage spirit world house, with walls and ceilings that are all mirrors, and replacing it, rising up on a lift, the real world grunginess of the house of Barak the Dyer and his wife.

For all that and the rest of Herbert Wernicke’s production, it’s still the music, as rich a score as any Strauss wrote, that carries the fantasy. This was heard in the fourth performance of the current run from the matchless Met Orchestra and a superior cast under the baton of an inspired Vladimir Jurowski. Christine Goerke, as the Dyer’s wife, was as remarkable as had been reported. Through most of the tale, the Dyer’s wife complains bitterly about her husband, the good and all-suffering Barak. Tempted into surrendering her shadow to the Empress at the cost of her fertility, the Wife grows in the course of resisting, as does her voice and persona. What was potent and possessive in the early going, expanded, bloomed, Goerke’s voice itself represented the dramatic verity. No wonder the Met is embracing her as the next Brünnhilde. 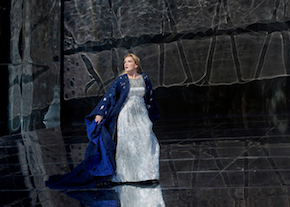 Remarkably, very much the same vocal and dramatic expansion occurred in the role of the Empress in her journey from half-spirit to humanity, sung by the soprano Anne Schwanewilms. The daughter of the god Keikobad and a mortal woman, the Empress is sterile and can cast no shadow. She must obtain one in three days or her husband, the Emperor, will be turned to stone. Led by her Nurse, a malevolent creature, down flights of stairs into Barak’s scruffy home, she acts as his servant, mostly in silence, while the Nurse bargains to get for her, the Wife’s shadow.

Instead, refusing to steal the shadow, the Empress finds humanity, her soul, compassion. At that point, the voice of Schwanewilms soars, in great lines, wide-reaching — vertically in great melodic intervals — horizontally in outstretched phrases, the Strauss lyricism that captivates. It is the evolution during the opera of this rhapsodic, impassioned song line that stands as metaphor for the transformation from static semi-god, in the case of the Empress, and self-centered harridan in the case of Wife, to humane and loving states. Barak and his Wife are united lovingly (after too long an epilog of wandering the stage and searching for each other) with promise of children in their future. The Emperor, now a stone statue, is dissolved to become himself and, we assume, more of a husband. The wicked Nurse is banished from the spirit world by Keikobad, to live among the humanity she hates. 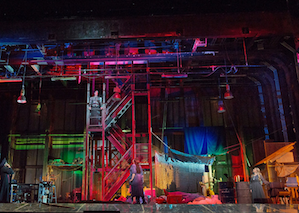 It’s an intricate tale, but then so is Strauss’ music that starts off intensely, delivering compacted motifs, and develops with unrelenting thrust and more color and character in the orchestra than can be produced in costumes and scenery (although Wernicke’s production goes for it).

Torsten Kerl was the Emperor, singing the two commanding arias in a brightly sheathed, narrowly focused tenor. Ildikó Komlósi was the broad-ranging mezzo-soprano with keen dramatic thrust, an intense presence as the Nurse. Johan Reuter singing in a warm bass-baritone, both vocally and gesturally, embodied the good man, Barak.

There was a host of others, of course, several of them heard but not seen, Keikobad’s Messenger, the bass-baritone Richard Paul Fink, The Young Man (with whom the Nurse tried to seduce the Wife), Anthony Kalil, Voices of the Unborn (six sopranos) and the Falcon, the soprano Jennifer Check. The Falcon who comes and goes, leading the Emperor in his hunting, and symbolizing something or other, was unfortunately and distractingly personified by an acrobatic dancer who resembled nothing other than a bouncing, wooly spider. A projection of an animation or light — especially in that mirrored enclosure — should have done the job. A minor matter in so great and complex an operatic odyssey.

(The premiere of the Munich State Opera's Dec. 1 performance of its new production of Die Frau ohne Schatten will be will be streamed live on Staatsoper.TV beginning at 6 p.m., local time.)