I’d thought I’d seen every possible CD combination, but leave it to Bridge Records to come up with an original, refreshing Tchaikovsky release. The one CD contains the composer’s two largest and most important piano works, played to the tens by virtuoso Vassily Primakov: The Seasons, Op. 37b, and the big Grand Sonata in G Major, Op. 37 (Bridge 9283). 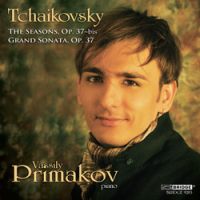 Tchaikovsky wrote his 12-movement Seasons on commission from a monthly magazine, largely because he was short on funds. He was to write one relatively brief piece per month, to be published in the magazine Nuvellist. Each piece was to be descriptive of that particular month. (It’s often been pointed out that the more appropriate title would have been The Months.)

Pianists rarely perform the full cycle at one sitting, due to its overall length of nearly 43 minutes. Yet there are favorites that do turn up, of which “June (Barcarolle)” is pretty well-known, as is the final “December (Christmas-Tide),” a waltz worthy of Tchaikovsky’s ballet waltzes.

Other pieces fancied by recitalists include “October (Autumn Song),” the lively “November (In a Troika),” and “January (By the Hearth).” I’ve always admired the folksy dance “February (Shrovetide),” whose neglect puzzles me.

Even more overlooked are Tchaikovsky’s three Piano Sonatas, which is not at all puzzling. The first was a student effort in F minor, and that of only one movement. The second, in C-sharp minor, is of even less worth, and indeed, Tchaikovsky withheld it from publication. To say it’s uneven is putting it mildly.

Then comes the big Grand Sonata on this recording. It’s in a large, four-movement layout running over 32 minutes. A listener can pick out strong hints of Schumann here and there amid the rich, occasionally thick symphonic sonorities.

The sonata took years to complete. It was begun in Switzerland just after the composer’s divorce, and then was set aside and taken up later in Russia. In a way, that’s its flaw. The first two movements — a Moderato and a soulful Andante — meander, sounding more willed into existence than inspired. But the brief and utterly captivating scherzo is followed by a kind of perpetual-motion finale that requires the most extreme dexterity in the playing.

Moscow-born Vassily Primakov is fully up to that. He possesses technique to burn, rather like Horowitz. But more admirable even than that is his variety and sensitivity to piano color, plus a keen feel for the subtleties of a true Tchaikovsky rubato. His tempo selections are flawless, always free of exaggeration.

His first big attention-getter was winning Warsaw’s Chopin Competition at age 19. He left for further study at the Music Academy of the West in Santa Barbara, and later still worked with Jerome Lowenthal at the Juilliard School of Music. He won more prizes at each, plus several more international piano competitions.

Enter Bridge Records, which had made a number of recordings with him, including a pair of Mozart concertos, Beethoven sonatas — and of course, Chopin. The newest of these include the two Concertos (Bridge 9278) and a set of 21 Mazurkas (Bridge 9289). Considering the lack of mega record stores in the Bay Area these days, it’s good to know that you can contact Bridge directly via www.BridgeRecords.com.