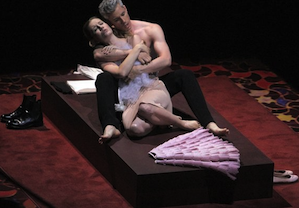 As Mozart’s opera The Marriage of Figaro opens, the clever factotum is carefully measuring his nuptial bed to see if it will fit in the small room that he and his beloved Susanna will soon occupy as man and wife.

In most opera houses this act of calculation adds a nice domestic touch. But when the setting is the stage of the Walt Disney Concert Hall, careful measurement becomes a metaphor for the entire project.

Last year the Los Angeles Philharmonic and its marquee Music Director, Gustavo Dudamel, began a project to stage the three Mozart/da Ponte operas at Disney Hall, beginning with Don Giovanni. The production featured a stellar international cast and a prestigious design team headed up by Disney Hall’s creator, Frank Gehry. The task of directing the trilogy was assigned to Christopher Alden. 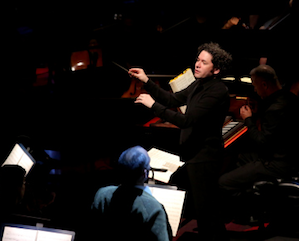 The result was a combination of hits, misses, and miscalculations, most notably by Gehry whose set design placed Dudamel and the orchestra upstage of the singers who were forced to rely on monitors to follow his direction. It also incorporated large modular set pieces disrupted sight lines and threw off the acoustical balance.

As the saying goes, “Live and learn.” And the Philharmonic did learn, as demonstrated by the success of this brilliant new Figaro. The only problem is, there are only two more performances: May 23 and 25. So if you don’t already have a ticket, you’re probably out of luck.

As designed by French architect Jean Nouvel, the orchestra is back in its traditional orientation downstage of the action, which clearly enhances Dudamel’s prodigious skill as a musical communicator. He and the orchestra are surrounded by an elegantly curving platform that leads upstage to a set of rising stairs and ledges that provide ample space for action while minimally obstructing sight lines. The entire set is bathed in red light and atmospheric projections designed by Aaron Black. The couture costumes, with their dazzling shimmer, sumptuous fabrics and evocative lines worthy of a Paris runway, are designed by fashionista supreme, Azzedine Alaïa. An entire review could be devoted to his creations, which are both character-defining and eye-catching. 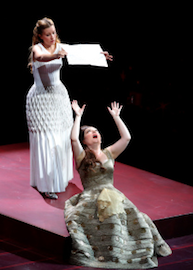 Alden, whose direction proved awkward for Don Giovanni has adopted a much more concise style for Figaro, somewhere between a stylized concert version and a traditional opera. He often pares the action down to essentials and indicates critical relationships through carefully composed tableaus. But when the plot requires it, Alden provides plenty of action that often incorporates features of the hall well beyond the stage.

By placing the characters in distinctly modern dress, this Figaro also draws direct parallels to current trends regarding socially dictated relationships and gender identity. This is particularly true in the case of the testosterone-crazed man-child Cherubino, who is sung with equal parts swagger and swooning by mezzo-soprano Rachel Frenkel. Cleverly, when Cherubino is introduced disguised as a house maid in Act 3, Alden has Frenkel appear as her decidedly feminine self — so you have a very seductive young woman vamping as a man who is thoroughly enjoying cross-dressing as a woman. It’s delicious.

The cast is led by French baritone Edwin Crossley-Mercer. His Figaro is a man hemmed in by social convention, filled with love for his soon-to-be bride, and smoldering anger toward the rapacious Count Almaviva, the resonant bass-baritone Christopher Maltman. 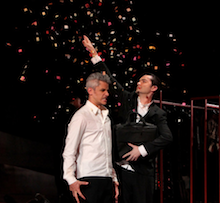 In this consistently strong cast it is Dorothea Röschmann, however, who commands our attention as Countess Almaviva. Her performance captures perfectly the sadness of this proud woman trapped in a loveless marriage to a philandering husband. Her lamenting aria, “Dove sono” was heartbreakingly poignant and dulcetly pure of tone.

And then there is Dudamel, whose ever-attentive conducting created a perfectly balanced confection of interweaving vocal and orchestra layers. The result was a Marriage of Figaro that combined dramatic intensity and social commentary with music making at a level that could only be described as sublime.